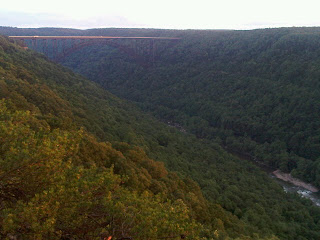 Rafted the Gauley River today in West Virginia with Class IV and Rivermen. It was only round 800cfs, so they put us out in inflatable kayaks that they call duckies. Most of the people had never handled a craft like that, and the crash 'n burn carnage was considerable.

Entertaining, but I ran a lot of cleanup. I continue to find myself out of shape, and resolving to do something about it. I used to know this guy that would bring weights when he toured with his band, and would run 'round this hotel several times in the morning. I'm rather sure a similar plan adapted for camping could only do me good. Once again it was suggested I come out for raft guide training in April, but I was kind of winded after the second time I pulled a man into his boat today. Gotta get more fit, before I can live the dream.

The weather was all sorts of wonderful, and I just drank in the gorge, at least while we floated through pools. Took a swim at Chainsaw rapid, as I often do (the margin of error in that hole is slim), but it was all in good fun. Sometimes a perfect run ain't half so exhilarating. And, after I cleared Back Ender rapids I headed back up for some surfing, lost my paddle, decide to ride it anyway, held fast with some 360s for at least five minutes before landing in the drink. Good times.

Had a couple beers at take out and on the ride home. When we got back to base, I bought the guides a round as a tip. They took me on some mischief set to the tunes of the Blues Brothers as thanks. That combined with my new Teva tan makes me feel one step closer to being some sorta hippie river rat. Nothing but love for 'em.

It was wing night at the pub on base. I saw a couple of our old favorite guides drinking and serving. This place has had to merge and expand a lot in the last few years to compete with larger, more commercial outfits. It makes me a little sad, but when I'm on the river or ordering my favorite at the bar, it still feels like home to me.

Not trying to be a tagalong or get into too much trouble, I left the guides and headed back to my tent 'round 10pm. If I can figure out that couch surfing situation, I'll be in Indianapolis tomorrow to see my boy Tyler in Cut Short play a good old midwest hardcore house show.
Sent via BlackBerry by AT&T