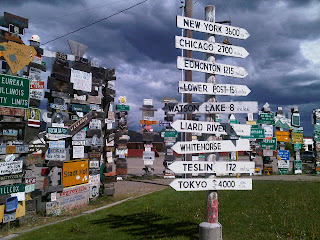 Slept in the car outside Fort Nelson. It was already starting to get lighter around 4am, but we slept in a few more hours. Headed into town to find the info center. There a very nice, little old lady, who had been living in a log cabin with no electricity or running water for the last twenty years and found the southern city folk especially odd, let us wash up and use the internet.

It rained from Fort Nelson to a little south of the Yukon border. For the most part the road followed a shallow, rushing river at the bottom of a wide canyon. Water coursed down the sandy slopes, leaving large patches of loose gravel in an already poorly maintained road. A few construction crews were clearly trying to control the damage, but orange warning signs were everywhere. The mountains above were cloaked in clouds that made them look softer and smaller. Occasionally, the river would slow and widen into long, narrow alpine lakes illuminated by turquoise shores.

I finally saw my first moose today, one of the few great large mammals of North America I had not seen in the wild yet. A skittish mother and baby were grazing by the roadside. The baby was already about the size on an elk. I can't imagine the sheer bulk of a full grown male. We also saw a couple small herds of bison, and a black bear. YAY, animals!

In the early afternoon we crossed to the arid side of the range, and entered the Yukon. We started to pass through lands that were bigger, wilder, more rugged and untouched. They are unlike anything I've ever seen before. There are no standard human markers to judge their size against, and the long hours that the sun slides along the horizon gives the atmosphere a strange blurred glare at a distance.

In Watson Lake, we stopped at the info center for maps of the Yukon. My atlas cut off a little north of Dawson Creek, and did not resume in detail until Alaska. The building is surrounded by a grove of tall posts sprouting signs that announce the names of places from around the world. Roads, towns, counties, states, provinces, distances, populations, and the names of families homes. I wrote our hometown and names on a piece of wood with permanent marker, and we nailed it to a post. Adding our mark of home and existence to a collective cry of over 6,000 signs.

An hour south of Whitehorse we stopped for the best cinnamon bun I've ever had. The campground bakery had closed fifteen minutes before we got there, but when they saw my sad face, and heard how far we had came, they obliged us.

Orion found us a couchsurf in Whitehorse with a nice young couple originally from British Columbia. Dan and Amy showed us around town a little before the sunset at midnight that put the clouds on fire.
Sent via BlackBerry by AT&T