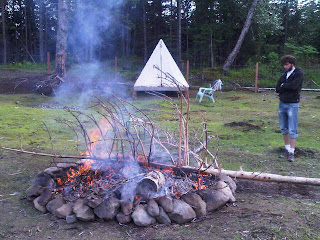 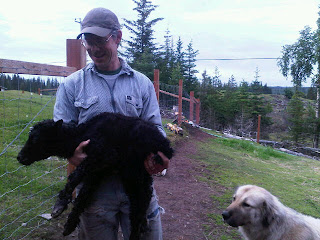 Sometimes I feel like I'm hard to get along with, and a hard woman to love. Yet, for the most part I want approval, friendship, love, and support. Most of the people who I consider to be my best friends are people are grew up with. I know they love me even though they've seen me at my worst. And somehow, though I don't have the slightest idea how or why they, accept my duality. They call me out, and love me hard. That can make it uncomfortable to be surrounded by new strangers. I feel like they can't help but see me as different and difficult, and I am reduced to the ugly duckling I was as a child. For no reason in particular, just a general feeling brought about largely from my own insecurities, I find myself lonesome and homesick for the people who have come to inherently understand me and my flaws. I miss my best friends dearly.

The main project for today was building a massive fire pit: two feet deep, six feet across, and ringed in large rocks. I built it with two new WWOOF volunteers who came in the morning. They're also from France, a sweet, hardworking couple who were a pleasure to work with. A friend once told me that nothing gets you in better shape than shoveling, and I am now inclined to agree with him. It was challenging in the best way.

After the fire pit was finished, we christened it by burning a massive amount of sticks that had been cleared from the land. It filled the pit several times, and burned for hours. The heat was so intense it singed my hair, even though I was careful not to get too close to it. I felt good to tend the fire. I was using my skills to take care of a necessarily task. Once everything burned down to coals you could hear a tinkling sound almost like tiny wind chimes. I sat for a couple hours simply listening to the fire, raking my zen rock garden of coals, and smelling the wood smoke. More time in my newly discovered meditative void.

Perhaps I screamed into the void in excess, but by evening when a highly anticipated event went down I was in a rare and odd mood. The meanest yak finally had her baby, and we had to grab him as soon as the birth was noticed, so that he will be more tolerant of humans. The air was filled with excitement, and everyone wanted to be the officially yak feeder until they heard the schedule. I just sat back and soaked it in from a distance. Though, I'll must say he's awful cute.
Sent via BlackBerry by AT&T