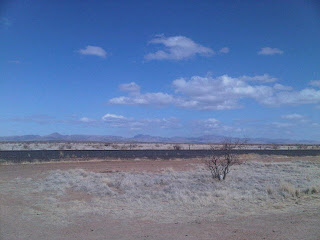 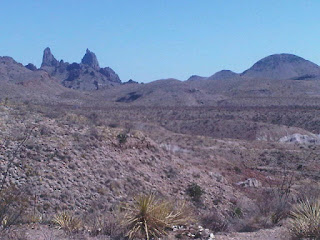 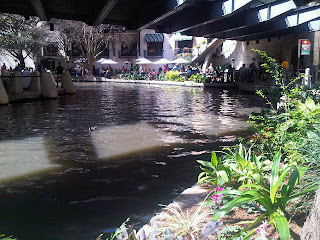 Dear, readers! I'm headed to my first SXSW. Way back in the day when I was but a wee music industry intern, a wise bossman once told me not to attend the massive conference until I could get someone else to pay for my badge. Well, thanks to my master's program and KXSC Radio that day has finally come. Friday evening with my trusty Toyota, Sal, chock full of fellow lady radio staff members, snack rations, and sleeping bags we ambitiously set off on a wing, a prayer, and a tight budget.

After 3 hours of stop-and-go traffic we finally cleared Los Angeles City limits, and lit out into the desert with the setting sun full in the rear view mirror. The goal was a cheap motel in Tuscon, but after an epic search for burritos in Indigo and the timezone shift, we didn't reach the town until 2am local time. The station's general manager, Alex had been reading me The Hunger Games, the moon was bright, and I was still full and awake. Rather than waste money on a motel, we took a quick nap in the parking lot of a truck stop and kept keeping on.

Shortly after the go-big-or-go-home decision had been made, as we neared the middle of nowhere that is the New Mexico border, it started to snow. Too late for second guesses, I had to press on. No one else in the car drove stick. On tenderhooks, my nerves like shot wire, I drove through the thickening snow that hung eerily by the glare of my headlights. The strangeness of snowfall over the desert in spring clung to the scene. The ladies did their best to help keep me awake, but they nodded in and out of consciousness as I periodically blew past long-haul truckers in the night.

A good ways into New Mexico the pale glow of before-dawn illuminated the extent of the weather's reach, as reality returned. At dawn, the snow still coming down thick and constant, we stopped at a diner for great warm messes of huevos rancheros and pancakes hot off the griddle. We gobbled them down and savored them thoroughly, as the ladies from southern California marveled at the frozen fluff from the sky. As a reward for my full night of driving, they insisted on picking up the bill. I gratefully agreed, went to the bathroom to brush my teeth, and emerged to find a full fledged snowball fight in action. Ducking for cover, I ran to the car, and we set off for Texas.

One more nap was enough to power me to El Paso. By 10am we were in Texas, barely believing that 16 hours earlier we had been hundreds of miles away in LA. In El Paso we window shopped for cowgirl boots, turquoise jewelry, and woven rugs. Fancy tourist trinkets. But, we still had a long way to go, so we piled back into the car, and got back on the road.

In my continuing quest to conquer all the national parks, we were headed to Big Bend National park where the Rio Grande split the states from Mexico. We got off the interstate and on to my kind of roads, empty stretches of sun-bleached tar, one lane in each direction to the horizon. These are the sort of roads where you stumble upon life, and pause to appreciate it. That's how we found Marfa. Candice saw a sign that said 60miles to Marfa, and perked up. She remembered that Prada had done an art installation in the middle of the desert. 45 minutes later, we flew past it. I let out a loud exclamation and hit the breaks, immediately waking everyone one up, as I swung a quick u-turn for the photo op. A little further down the road we found Marfa, an eclectic desert town full of history, modern art, and collective living. We toured the local museum, but the sun was headed down, so we headed out.

The closest sizable town to Big Bend was Alpine, TX. A fairly typical small, American town, but for artistic and tourist influences from its national park neighbor and Marfa. The temperature was dropping fast and nearing 40 degrees. Though my fellow lady passengers had been tough rough riders, they'd had never camped before, and I didn't want to inflict the cold on them. We got a hotel room, and went out to explore the town. At the local ice cream parlor, we met an ambitious young couple, all hipster flannel and tattoos, who had dropped everything 3 weeks prior to move out of the city and follow a dream. Later we found ourselves at the local blues bar, $2 drinks, wailing cover band, firepit in the yard, and old women waving scarves as they swayed to the music.

In the morning we headed into the park, and spent a full and delicious day driving rough roads, hiking dusty trails, splashing in the river, and trying to capture it all on film. It was big. Everything's bigger in Texas, even the scale of the national parks. Canyons and buttes loomed over us in pale desert colors of tan, rose, and olive all under the infinity, baby blue sky and a beating sun. I want to go back for more. I could drink deep of that place for days, and not get the marrow.

We left at sunset, drove as far as we could, snuck into a state park for a couple hours of sleep in our seats and hot showers. Morning found us in rolling green hills, dotted with trees in spring flower, on the outskirts of San Antonio. We delved into the city for the day, saw the Alamo, fell in love with the venitian- like River Walk, and discovered the best margarita in the world. The secret is jalapeneo.

In the evening we finally set out on the last leg of the journey to Austin. We'd rented a house just 15 minutes from downtown where the several cars who had set out from our little radio station in Los Angeles would convene and camp out for the week. We were all buzzing with nervous anticipation for what was for many their very first SXSW.

On The Road SXSW