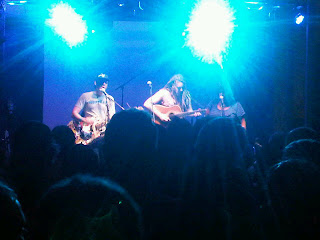 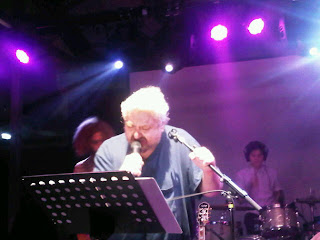 I approached the first day of my first SXSW with trepidation. It had been built too high in my mind and then crumbled a bit, so I was proceeding with caution to preserve any chance for awesomeness. Woke up early, ate a hearty breakfast, and went with Brandon, our advisor who also had a badge, to the convention center.

Before noon parking wasn't too bad, and we were soon entering the monolithic building with big eyes. It felt like high school when I'd go to Model UN conferences with a carefully constructed veneer of professionalism, but underneath I was a bundle of anxious nerves, mouth shaped in a perpetual "oh!" of wonder. We got our badges quickly, and entered the trade show in the main hall where we were bombarded by all manner of exhibitors hawking barely useful wares with enough spectacle to make P.T. Barnum proud. A sucker born every minute. Bemused, we breezed through the trade show, pausing momentarily at only a handful of booth. The Memphis exhibit at least had the good taste to have a real hometown band playing, and wasn't selling anything useless. I've always loved Memphis.

At 3pm we headed to the stage, where the team that implemented the redesign of YouTube would be presenting. I can't say I was a fan of the new layout, but after they explained their decision making process and their long-term plans, I appreciated it a lot more. Never underestimated the research, testing, and analytics behind new media! Know your user.

After the YouTube presentation, we headed back to the big house we rented to call home for the week to rally the troops. Grocery supplies were procured, and I picked Kat B up at the airport. Kat was the only other student with a badge from the radio station, and we had already commiserated on mutual interests and objectives at SXSW. For our first evening in town, we headed to an official showcase a little off the beaten path that promised to be relatively chill and not too crowded. Relatively be the operative word.

At 9pm we headed to The Belmont for Daniel Johnston's "Space Ducks" Launch Party. We got there just in time to see Jeffery Lewis, a singer-songwriter, who played a couple catchy, folk songs and then launched into one of the most impressive historic ballads I've ever heard. Lewis had wrote and illustrated a short comic book depicting the French Revolution with blatant Occupy Movement overtones. While the pages of the comic book were projected on the screen behind him, he sung their story in rhyming verses for over 10 straight minutes, his ernest voice never faltering.

When he finished the epic piece to universal applause, he invited Kimya Dawson on stage. A fan of The Moldy Peaches since long before Juno, I was ecstatic to finally see Dawson live. She was every bit as impressive and endearing as I thought she'd be, exuding a humble magnetism. They played a few songs together that they had written several year prior with the help of a blonde dreaded bassist, and called themselves The Bundles. However, soon the stage was succeeded to Kimya Dawson solo. She mostly played songs off her 2011 release, Thunder Thighs, opening with a lullaby for her daughter and closing with "Same Shit/Complicated", which references her alcoholism and drew raucous hoots of support from the crowd. Dawson truly is a deserving indie scene queen.

There were a handful of other dudes with scratchy vocals and beat-up acoustic guitars that failed to catch my attention, and with the setting running nearly an hour behind the audience was restless. In a less than congenial atmosphere Motopony took the stage. I vaguely remembered hearing them before, and registering them as nothing special, over-polished. However, I was feeling in a receptive mood, and caught myself nodding along. If one ignored the singer and bassist, who both possessed a level of stage presence bordering on obnoxious, there was much to be appreciated. The keyboard player was quite talented, the guitarist charmingly stoic, and their drummer had the most studied, unique style.

As it turn out, it was a good thing I made my piece with Motopony, because by some obscure industry wrangling they were Daniel Johnston's backing band for the evening. I've seen Daniel Johnston perform before, and every time I'm struck by his creativity, bravery, and passion. To continue to make heartfelt music, dream imaginative stories, perform and publish, despite everything he's been through is an impressive feat of humanity. If you're not familiar with his story, I highly recommend watching the documentary, The Devil and Daniel Johnston. With some encouragement he finished the set with a massive singalong of "True Love Will Find You In The End".

Knowing nothing could top that performance, and eager to get an early start the first day of panels, Kat B and I headed back to the house. I gave her the pink, puppy bedroom complete with pet fish that I had occupied the night before. Instead, I pitched my homey tent in the small backyard by Austin's city light pollution, and happily fell asleep to the purr of the air conditioning unit.