Showing posts from May, 2013
Show all

- May 07, 2013
AWESOMESAUCE, dear listeners! It's the 50th episode of Make More Noise. To celebrate I put together a special 2 hour show featuring some of the best local, indie acts from Delaware, Philadelphia, and the general Mid-Atlantic region. This is the DIY scene that raised me, and shaped my musical tastes. Without these artists and friends, I never would have been able to DJ show after show, week after week, for the past two years. Press play and hear a myriad of aural influences from new folk to crust punk to experimental noise to electro pop. Originally aired on KXSC.org, a service of USC.

Opening with a rip roaring rendition of "Carry Me Back" the title track of their full-length release last year, Old Crow Medicine Show brought the house down for a sold-out show at the El Rey on Wednesday. The song's title and lyrics reference a tune from an older tradition "Carry Me Back To Old Virginia", which has roots dating back to the 1800s, and was popularized by many famous musicians including Jerry Lee Lewis and Louis Armstrong. These are the musical customs that inspire Old Crow Medicine Show, who reinterpret the sounds of folk long gone to speak to a new generation. In the digital era, Old Crow Medicine Show was discovered in a decidedly unmediated way. Doc Watson heard them busking on the corner where he used to play in Boone, North Carolina, and immediately asked the band to play his music festival. This band doesn't just talk the talk. They walk the walk. 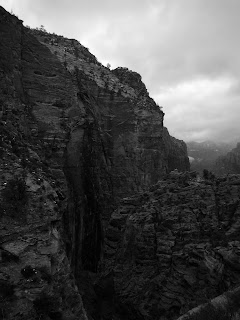 Back in December I took a trip to Zion National Park in Utah. Not most ideal season for the park, but certainly less crowed. Though I had to slog through freezing rain and icy snow, it was worth it to capture the way the storm clouds collided with the canyon walls.