Showing posts from July, 2012
Show all

- July 29, 2012
Gather 'round folks and friends for an hour of homegrown tunes old and new on Down In The Valley with Mountain Momma. From Alan Lomax recordings to tale tales to Lucero to The Felice Brothers, we've serve you up a pipping hot slice of Americana pie. Recorded live on Sunday evenings from 8 to 9pm on the West coast. Brought to you by KXSC.org, a service of the University of Southern California. Down In The Valley 009 by Orsosachisays on Mixcloud Playlist When I Was Young - Lucero Shake 'Em On Down - Fred McDowell Old Dollar Mamie - Recorded Live by Alan Lomax Raise Hell - Brandi Carlile Haste To The Wedding/The Darling True Love - Frank Fairfield Talk About Lonesome - Beachwood Sparks We Could Be Friends - Van Risseghem Sweedeedee - Michael Hurley A Brief Intermission - The Snake The Cross The Crown Lost Coastlines - Okkervil River Penn Station - The Felice Brothers We'll Be Here Soon - Phosphorescent Lost In The Valley - Rose Cousins
Post a Comment
Read more 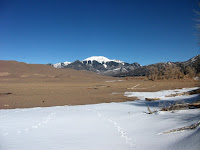 Earlier I posted photos of Great Sand Dunes National Park taken with my Holga 120 TLR, but what fun is one camera when you can have two? These are the last photos taken with my beloved Fuji Finepix J38 point-and-shoot before it succumbed to the sand and my aggressive use. I know photography purists would never be caught dead with a point-and-shoot, but I hate carrying tons of equipment on a hike and I love how Fuji handles color. It was a good camera for the two years it lasted me. You can see the black & white 120mm photos from earlier in this series here: Great Sand Dunes (Pt. 1) and Great Sand Dunes (Pt. 2) .
Post a Comment
Location: Great Sand Dunes National Preserve, 11999 State Highway 150, Mosca, CO 81146, USA
Read more

Down In The Valley 007 with Grayson "Moonshine Mason" Smith

- July 15, 2012
A special live set from Grayson "Moonshine Mason" Smith here on Down In The Valley with Mountain Momma. Real, homemade folk music, Moonshine Mason plays y'all some covers of Neil Young, The Shins, & The Decemberists. We're proud to bring you the best in Americana music from right about now and back in the day every Sunday 8pm PT/11pm ET on KXSC, a service of the University of Southern California. Down In The Valley 007 with Grayson "Moonshine Mason" Smith by Orsosachisays on Mixcloud Playlist Rain Still Falls - Yonder Mountain String Band Same Ol' River - Sam Bush Old Barns - Greensky Bluegrass Old Number Seven - The Devil Makes Three Guns of Butter - Hot Buttered Rum Turn Up The Bottle - Steep Canyon Rangers Exclusive live performance with Grayson "Moonshine Mason" Smith It'll Be Alright - The Infamous Stringdusters The Girl - City and Colour Let It Be Me - Ray LaMontagne
Post a Comment
Read more

- July 10, 2012
A super special edition of Make More Noise with Sachi Subterranean featuring a set list from Graffiti Radio's own Mike Nigro. Tune in to hear the top 6 tracks Mike Nigro has been digging, plus a full hour of music spun off from that. It's an awesome collision of musical minds! Let's take you on a ride from Thin Lizzy to Father John Misty. Brought to you by KXSC and USC. Make More Noise 020 by Orsosachisays on Mixcloud Playlist The Boys Are Back In Town - Thin Lizzy The City - Dismemberment Plan Harry's Code - Left & Right To Just Grow Away - The Tallest Man On Earth Nancy From Now On - Father John Misty Have You Ever Seen The Rain? - Creedence Clearwater Revival In The Beginning - Daughn Gibson Choking You - Prefuse 73 Still Sound - Toro Y Moi Far Away - Washed Out Penelope - Pinback Soft Pyramids - Q And Not U House of Cats - Meneguar Good Woman - Cat Power Dreams - Fleetwood Mac Late - Teen Daze
Post a Comment
Read more

- July 08, 2012
Something old and something new on this edition of Down In The Valley with Mountain Momma. Gather 'round and listen to tributes to Okeh Records, old timey tunes from the Blue Ridge Mountains, and new Americana releases. Recorded live on Sunday evenings in the KXSC studios, and brought to you by the University of Southern California. Down The Valley 006 by Orsosachisays on Mixcloud Playlist Will The Circle Be Unbroken - Chris Barron Insane Crazy Blues - The Hellhounds Goin' Down the Road Feelin' Bad - Langhorne Slim Muleskinner Blues - The Stonemans Be Kind To A Man When He's Down - Da Costa Woltz's Southern Broadcasters The Railroad Flagman's Sweetheart - Frank Jenkins' Pilot Mountaineers Bottome of The River - Delta Rae Times Won't Change - Cory Chisel and the Wandering Sons The Boxer - Jerry Douglas feat. Mumford & Sons and Paul Simon He's Coming To Us Dead - G.B. Grayson & Henry Whitter Wasn't She A Dandy - Hill Billi
Post a Comment
Read more

- July 03, 2012
Make More Noise with Sachi Subterranean spins you quality tracks from some of the best new releases of June 2012. Hear new music from Metric, Bobby Womack, The Temper Trap and more! Keep it fresh this hot summer with Make More Noise every Tuesday from 1 to 2pm PT on KXSC.org, a service of USC. Make More Noise 019 by Orsosachisays on Mixcloud Playlist Youth Without Youth - Metric Back to Your Heart - POP ETC Flutes - Hot Chip Whatever Happened To The Times - Bobby Womack Leading Me Now - The Tallest Man On Earth Salvation - Langhorne Slim & The Law Would YOu Come And See Me In New York - The Welcome Wagon Save Part Of Yourself - Brandi Carlile The Sea Is Calling - The Temper Trap Body of Work - The Mynabirds Heartbreaker - The Walkmen When The City Lights Dim - Cold Specks
Post a Comment
Read more

- July 02, 2012
Protest songs and the craft of oration in this episode of Down In The Valley with Mountain Momma. Gather 'round for tales of train hoping and songs of the people, featuring Utah Phillips and Pete Seeger. Down In The Valley plays you the best in Americana music live on KXSC, Sundays from 8 to 9pm PT. Brought to you by the University of Southern California. Down In The Valley 005 by Orsosachisays on Mixcloud Playlist Green Rolling His of West Virginia - Utah Phillips Queen Of The Rails - Utah Philips Starlight On The Rails - Utah Philips Deck Of Cards - T. Texas Tyler Tomorrow Is A Long Time - Rosalie Sorrels Across The Great Divide - Kate Wolf Which Side Are You On - Ani Difranco & Pete Seeger Talking Union - The Almanac Singers If I Had A Hammer - The Weavers Ragged Hungry Blues (Pt. 1) - Aunt Molly Jackson Ragged Hungry Blues (Pt. 2) - Aunt Molly Jackson The Times They Are A-Changin' - Bob Dylan If I Die Tomorrow - David Birmingham Jail (Down In The Va
Post a Comment
Read more
More posts
[ Radio ] [ Photo ] [ Travel ]
[ Philosophy ] [ Music ] [ About ]