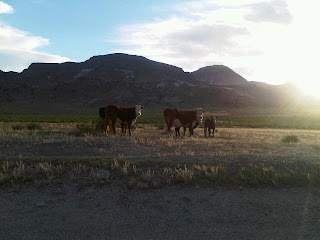 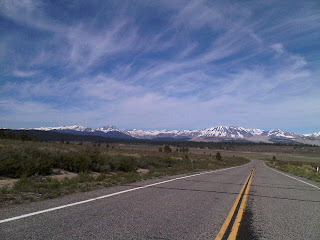 I made really good time on my night drive through the desert. Left Moab around 8pm, and got to Yosemite National Park at 10am: ten hours driving, three hours napping, and an hour time zone change.

Driving through the desert at night is usually a surreal experience. It's hard to judge distances in the dark with little identifying markers. Still, last night's drive was one of the weirdest I've done. It included the entire length of the Extraterrestrial Highway in Nevada. Didn't see any aliens or ufos, but it did go through over a hundred miles of open longhorn cattle pasture land. Luckily, I got to that stretch after dawn otherwise I could have easily hit a cow. Before dawn the road was hairpin turns through washes and foothills. Jack rabbits kept darting across the road, and the sky was clear enough to see the milky way. I drove for hours and never saw a house or car.

At the California border the road started to climb steeply into the Sierras. Past Mono Lake, I entered Yosemite through the far easter Tioga Pass entrance, where at almost 10,000 feet everything was covered in snow.

Unfortunately, right after I got into the park I ended up having a personal medical emergency. It wasn't life threatening, but it was more serious than I could handle on my own with my first aid kit.

Instead of the epic, leisurely, photogenic drive along the famous Tioga Road that I've imagined for months now, I made a rushed beeline past slow buses and RVs down to the Yosemite Valley to find medical help. In an hour the elevation dropped thousands of feet. The temperature at the pass was in the 50s, but the valley was almost 90 degrees. I really wish I could have appreciated the land and views more.

Spent a couple hours at the medical clinic. I'm probably okay, but the fine staff strongly recommended resting up in a hotel for the night, and I have to stay relatively near civilization until they get some test results back this weekend. I guess I'll have to pal around NorCal a little longer than I originally planned. No charging northward quite yet.

After they released me, the rest of the day involved forging through traffic out of the park, trying to find a hotel with affordable vacancies near the park (no mean feat at this time of year), and finding a cheap, filling, healthy meal.

After the initial anxiety and adrenaline rush wore off, I've kind of just collapsed. I don't feel at all as good about getting back to California as I thought I would. Things here are always almost too big to wrap my mind around. I miss the softer ranges of the east coast: Appalachia, Great Smoky, Blue Ridge, and Shenandoah. Those mountains are my friends. I know I'll be fine in the end, but right now I'm homesick and wish I had someone to hold me.

I'm going to attempt a few activities in Yosemite tomorrow. I'm still harboring wishes and delusions of climbing Half Dome. Sadly, I am not optimistic. I might give up, and beat a retreat to my friends in Sacramento. For now, I'm holed up in a motel with my complete works of Walt Whitman, looking for solace in a dead poet.
Sent via BlackBerry by AT&T