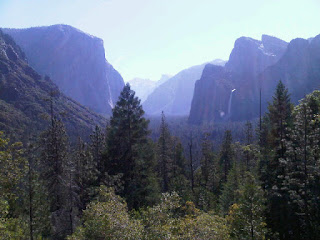 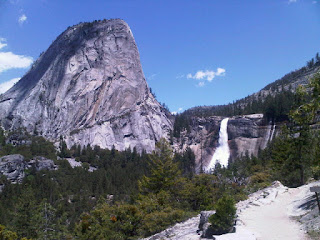 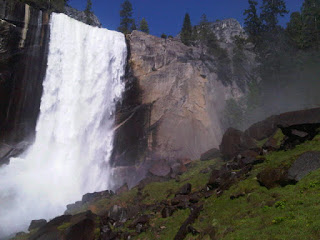 I felt a lot better after spending sometime with a real bed and unlimited hot water. Stuck around the hotel long enough to take advantage of their continental breakfast, and then headed back into the park. The ride in was deliciously leisurely. Everything was lit with the misty sunshine of a new day. The road was dappled with the deep, cool shade of trees that were trying their hardest to reach as high as the mountains, and the air was rich with the scent of loam and pine needles.

When I reached Yosemite Village I could feel that I was still more tired than usual thanks to yesterday's excitement, do I decide to try and take it a little easier. Yosemite Village is very pretty, but at this time of year it's a lot like EMS meets Audubon Society meets Disney World. It was way too much for me to handle in an unpleasant way. The only thing I enjoyed was their Ansel Adams Gallery, which had an impressive collection of prints.

Picked out a day hike less strenuous than the one to Half Dome, but still challenging enough that I hoped to escape the crowds. Went up to Nevada Fall by the John Muir Trail, and back dow via the Mist Trail, over seven miles with an mover than 1,000 gain. It wasn't as bad as the valley, but sections of the path were paved, and I had to dodge many slow moving tourists. The sights were classically impressive, but I had trouble appreciating them. There was just this feeling of being on the restored site of some famous 1950s Hollywood flick that many memorabilia collectors and come to purchase their obligatory souvenir from. Where was that special essence that had so inspired my idols, John Muir and Ansel Adams?

I tried sitting with the waterfall for awhile to understand its nature like Muir. I waited patiently with a view until the lighting became ideal before taking a photo like Adams. I even remembered that you can't fall off a mountain, and came running down the last stretch of trail calling out to the people I flew past like Kerouac's Japhy. Ryder in The Dharma Bums. Ah, to be part of this great postmodern generation! I can only synthesize my experiences through the histories and stories that have already came and contributed to our culture. There is nothing left to invent. I can only reinvent. I cannot relive the past. I can merely reenact it, and pray for some applicable glimmer of wisdom.

Went to Hetch Hetchy to watch the sunset from the dam before descending to civilization. I was so tired and driving so poorly, I pulled to the side of the highway in Lodi to close my eyes and collect my thoughts. I wasn't even there for ten minutes before a police officer pulled up with all the standard lines. "Where you coming from tonight?" "Where you headed?" "Any drinks tonight?" I was only a couple hours from Yosemite, but he still thought I was a little crazy to have come from so far. His suspicions were clear, but he had nothing to detain me on. He let me go with a stern warning not to sleep on the side of the road.

Finally reached Sacramento and friends enough hours before last call to make a night of it. Hung with some good old boys at a local dive with a couple of beers. Caught up with Justin and Zach, two cats I know from a few years back when we were all touring and our paths kept crossing around Chicagoland, SoCal, and the mid Atlantic. Justin taught me how to play dice games, and Zach let me borrow a vacant bed. More Sacramento adventures tomorrow!
Sent via BlackBerry by AT&T