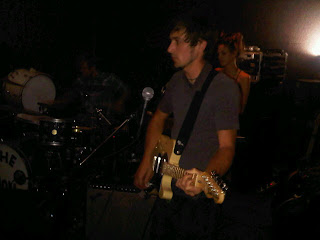 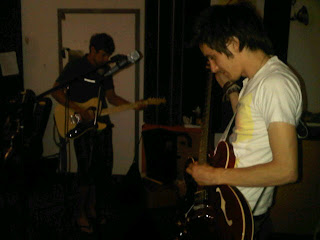 Another day taking it easy in Sacramento, tagging along with Zach. We've been doing an awful lot of talking about music and people, but surprisingly mostly the latter. I find him to be such a suspicious pessimist, but contrasted with my grand humanist ideals it at least makes for stellar debate material. He says I look at the big picture too much, and forget the details, which is all he is concerned about. There is some truth to that.

I met Zach about four years ago when I was interning at Victory Records in Chicago. The band he had just started tour managing was staying at a fellow intern's dorm, and had been kicked out by security. She asked me if they could stay with me, since I was renting a room in a large house. I had never heard of the band before, but my music scene honor code compelled me to oblige. They were great. We all hit it off and had a memorable dance party in my small kitchen with only a few people and a jug of wine. Ever since then I tend to run into them serendipitously around the country. But, Zach's the only one I stay in regular contact with, perhaps because we both share the experience of working behind the scenes in the music business.

Zach knows me reasonably well, and our conversations tend to have moments of illumination. So while we were waiting in the parking lot outside his band's practice space for AAA to send someone to rescue the keys I locked in my car, I asked him some questions to sort of analyze how I come off to other people. I frequently feel that I do a poor job of presenting my true self to people. I worry that I'm perceived as a concept that doesn't do my inherent self justice, which leads to a lot of misconceptions and unbalanced relationships. We had a long brutally honest conversation, that's not quite worth detailing. What matters is the conclusion I drew: I need to learn to be gracious, and all the broader words that go with that like grace and graceful.

My awkwardness, stubbornness, and fierce independence have been a part of who I am for so long. However, the person I want to be is more well rounded, softer...natural. I want to be tempered and weathered to wear down my sharp parts, my hard parts. Not to let go of the spirit, fire and dew that comprises me, but to tame that energy for more constructive ends. I need to learn to accept help and generosity with effortless graciousness. I need to move through life gracefully. I need to imbibe and effuse grace as a basically as breathing.

I want to live with a baby on my hip and a song at my lips with one hand free to wield a wooden spoon over a hearty stew. I want to marry a good man of integrity, who knows who he is and what he believes. And, we will make our home with the seasons where the mountains and their rivers meet the sea. We will be each others compliment, together working with our hands and brains to earn an honest keep. The family we make will laugh much, and love more. Do what we say, and live what we believe. Greeting each day as a great adventure, always ready to have fun.

That is my ideal, and I cannot realize it until I gain a greater grace.

After awhile, the rest of the band showed up, my keys were retrieved, equipment was fixed and set up, and Zach and Johnathan shared their new music with me. Very promising stuff. Then I got in my car, and headed for the coast.

I've reached a point in my travels with little planned route or itinerary. I'm rather worried about how I will get to Alaska on time, but I also have fallen to the frightening allure of living every day on impulsive whim. Ever since I got to California I've been filled with an overwhelming desire to set my feet in the Pacific Ocean, specifically the part that touches Northern California. So, I'm driving through the night to find the inspiring shores of Humboldt County.
Sent via BlackBerry by AT&T