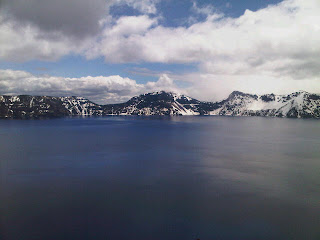 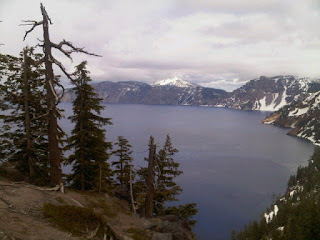 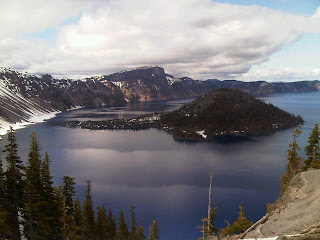 When I got to Crater Lake I discovered that over half the park was still shut down due to snow. That made camping extremely limited, so I had to descend to a national forest on the north side of the park. It all ended up being for the best. The sites were much cheaper, and they had a really nice shower for the grounds. Made a leisurely breakfast over a fire, and took my time getting back into the park.

The only trail not covered in twenty-foot snow drifts was the one that descends 700 feet from the rim of the extinct volcano to the over 1,000 feet deep lake that now fills it. It feels a little odd to hike down to a destination, most often you're hiking up to see something. A lot of times when I hike I fall into a meditative state, like the methodical motion of my body is a wordless mantra. It effects me the most when I'm moving upward, so the clarity is usually felt at the destination. Hiking down to something means my realizations came at the end of the trail. It felt backwards.

The lake was unreal. The snowy rim that cups it is around 8,000 feet above sea level, and its peaks are so close to the clouds it looks like they're holding up the sky. The water is a blue so vivid I thought I could only dream it, and expands almost to the peaks. I've never seen anything like it. At the south east side of the lake it Wizard Island, the exposed top of a volcanic cone, a ghost of the prehistoric volcano that once stood seething there. I've wanted to hike it for years, but sadly it was still too cold for boats to go out.

At Watchmans Peak, the highest point accessible in the park, it was snowing and I actually had cell phone service. So, I pulled over and called home. First, I called my poor, patient daddy, who has had to come to terms with both his children's itinerant ways, and rejection of traditional standards of achievement. I wished him a happy Fathers day, and he wished me well on my travels. Then, I called my Uncle Robbie, the other father figure in my life, and spoke with my aunt and cousin too. Finally, I called my mom, because I promised to call every Sunday. I realized that I was wearing her old sweater, my brother's old shirt, and boots I bought with money from my father. I realized I was loved.

What an impossibly great thing, harder to fathom even than the blue of that lake, snow in June, or the height of the mountains. I am unconditionally loved. I love unconditionally. And, I'm pretty sure that might be the only thing not worth more in moderation. Because it isn't about the give and take, or keeping score, or reciprocation. It's just an endless, effortless outpouring of faith and empathy for another person. That's what really matters.

By the end of my calls, the storm broke and the sun came out. I drove around a little more to see as much as I could. Then I headed out and back to the main highway.

My friend Josh and his wife Megan put me up for the night in Eugene. I hadn't seen him since my days in Long Beach when he lived with the aforementioned friend, Dan. I worked with Dan at The Militia Group, and he hosted many late nights at his house with all the interns in attendance. There I got to know Josh, who had majored in religion and history, and we had quite a few debates into the wee hours. Tonight we rehashed all the old subjects now with a few extra years of wisdom, and remember old times. Much thanks to Josh and Megan for their hospitality.
Sent via BlackBerry by AT&T