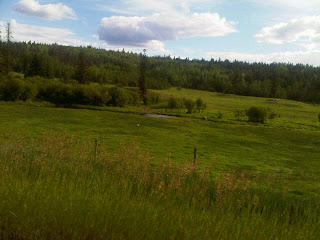 Said my goodbyes to the aunts this morning and headed north laden with snacks and garden fresh veggies they so generously pressed upon me.

Took Route 99, and went through Whistler about six months too late for Olympic festivities. That mountain area seems like tons of fun though. All the little towns along the way had kayaks, snowboards, and climbing gear for sale. All the buildings are new with beautiful exposed wood, and built to be more environmentally friendly. The scenery reminded me of Colorado: towering snow capped mountains and crystalline lakes. Wild lupines lined the road for miles. Further along the land got more arid, and sharp granite peaks gave way to ruddy brown, dusty slopes flecked with patches of silvery sage brush and dark stubby pines that recalled Wyoming.

I'm bad with my metric conversions, and sometimes it's hard to figure distances from kilometers to miles, but eventually I turned on to Route 97, which past Dawson Creek will become the Alaska Highway. This area was all high country pasture land of horse and cow ranches. Old, rusted out Ford pickups accounted for roughly half of the traffic. Then I was reminded of I-80 through upstate Pennsylvania, or the dairy farms of central New York.

All these lands remind me of places closer to home, but they are strangely still alien. Maybe it's because the vegetation is more northern, and the roads look like they weather rougher winters, or maybe it's just a general feeling. At first glance it looks familiar, but I only have to look for a moment longer for an uneasiness to set in. It's beautiful, but also clear to me this isn't my land. I'm just a foreigner passing through, searching for places that feel more familiar.

I got to Prince George around sunset. Orion called me a few hours earlier to say he was running late. He doesn't have cell phone service, so I holed up in a Tim Hortons to wait for him. Sibling shenanigans tomorrow!
Sent via BlackBerry by AT&T
On The Road