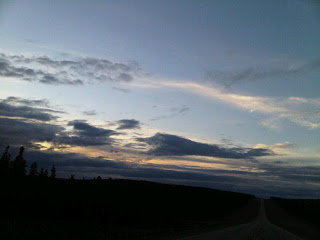 Spent the night in Prince George with a couchsurf host my brother had contacted and set up. Autumn was absolutely fascinating and sweet. It turned out we had both lived in Huntington Beach, California before, and she had been married at the Unitarian church in Harrisburg, Pennsylvania where I had attended youth group conferences. In fact, her husband and I probably have mutual friends. It never ceases to amaze me how small the world can be.

Unfortunately, my brother had trouble getting a ride west of Jasper, and ended up taking an over-night bus to Prince George. I picked him up in the morning, and we ran some errands to prepare for the trip north, and got underway around lunch time. By 3pm we made Dawson Creek, and officially began the Alaska Highway.

This area is all logging and mining country. Exceptionally rural, and the few and far between wayside towns are full of burly, blue collar men in hard hats and coveralls. The steep foothills roll on for miles, covered in pines so dense you can't see through their dark canopy.

We are finally getting so far north that the daylight hours are noticeably longer. The sun didn't seem to set until well after 10pm. And even now as I write this around midnight, the sky is dark but still tinged in twilight enough to make out the clouds. I am excited to experience days drenched in nearly 24 hours of sunlight as we get closer to Fairbanks.

I received more news of trouble on the home front today. It pains me to be so far from friends and loved ones, who need me. But, having my brother Orion around made everything a little easier to handle. Less loneliness, more sanity, higher spirits, and safer travels. As Murakami wrote in Kafka On The Shore, "in life compassion, in travel a companion". As both my brother and my best friend, Orion is an ideal adventure partner.

So, off we two camerados charge! Always northward and westward, the directions of less charted lands. Bound for the Yukon, we hope to make good time to Whitehorse.
Sent via BlackBerry by AT&T
On The Road