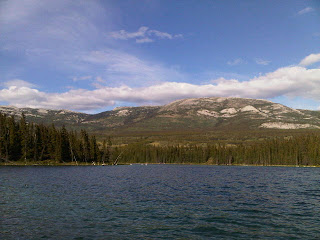 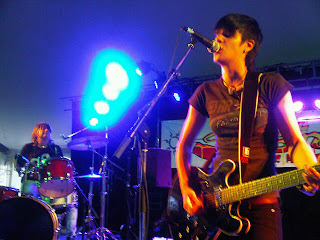 Slept in, washed up, and took it easy like Sunday morning before heading back to city center. Whitehorse is large enough to feel like a real town, but small and remote enough to still feel like an outpost. Many of the people who live here come just for the summer, making true locals scarce. In that sense it's still kind of a modern boomtown, but seasonal. Old, boarded up, rough built cabins stand next to a state-of-the-art visitor center and a Walmart.

Met up with our couchsurf hosts downtown, and got to know them better too. They are nice, interesting, and adventurous, definitely the kind of people I'd want to be better friends with. They came up north for a change of scenery from Vancouver, and are saving for a lengthy trip to New Zealand. Dan likes to talk about big ideas, traveling, and national parks. Amy is quieter with excellent taste in music, and majored in communications like me.

In the late afternoon, Amy went to work, and Dan took us to a local park with brilliant lake nestled below dry foothills. Later, to thank them for all their hospitality I made a big dinner of curried veggies and lentils over brown rice topped with plain yogurt and green onions. Dan made a salad with avocado, sprouts, and feta. To finish we went in on some local beer from the Yukon Brewery. Absolutely, delicious!

After dinner we went to check out the Sunstroke Music Festival, a benefit for the Whitehorse Humane Society that mostly featured local bands. The two touring notables were Whiskey Dicks, and a band from Vancouver I had never heard of before called The Pack A.D. The Whiskey Dicks were solid, and what you'd expect from a standard celtic folk rock band. But, The Pack A.D. slayed it. They're a two-piece, all-girl, lo-fi, garage rock band with slight southern and metal leanings, but clearly a proud product of the Vancouver scene. The singer reminded me of Juliette Lewis in all the best ways, and the drummer was completely badass. The crowd response was unbelievable. Maybe it's because not a lot of bands come through the Yukon, but everyone in attendance regardless of looks or age rocked out like it was their last day on earth. Phenomenal. I made sure to pick up a copy of the album they released earlier this year, We Kill Computers.

Early start tomorrow. It's 1,000 kilometers to Fairbanks, and I can hardly wait to get to Alaska, and back to the USA.
Sent via BlackBerry by AT&T