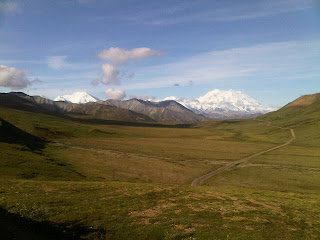 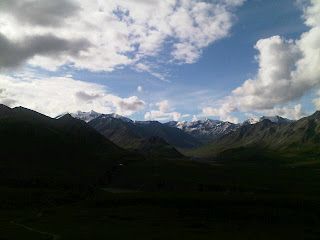 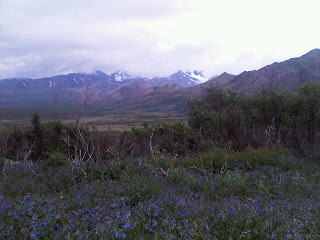 Caught the 5:30am shuttle bus to Wonder Lake, and for once I was happy to be with tourists and not driving. Having an extra thirty pairs of eyes makes it a lot easier to spot wildlife, and I could also do a little napping to rest up for hiking.

After 15 miles the road into the park is unpaved with few facilities, and only park vehicles, plus the few people who managed to get permits for private vehicles. Snowshoe hares sunning themselves in the road would scatter to the banks when they heard the bus. A huge mother moose was walking up the road with her much smaller baby calf. Near the Polychrome Overlook there were foxes along the road. We saw two young grizzly bear siblings just sent out on their own from their mother playing together in a field. At one point the driver stopped the bus so we could watch several wolves stalk and size up a small herd of caribou. I've finally seen wolves in the wild! Of all the national parks I've been to, Denali has been best for wildlife viewing.

I can also now proudly say that I've seen both the highest and lowest points in the United States. This morning the overcast weather the park has been experiencing for the last five days broke long enough for us to see Mount McKinley in its unclouded glory for most of the drive in. Even at 50 miles away it was awe inspiring, making all surrounding peaks seem insignificantly small, and commanding attention over the horizon, a heavenly white sentinel.

After the Eielson Visitor Center at mile 66 we descended to a valley made by snow melt, dotted with tiny clear pools wherever there were depressions in the tundra. Wonder Lake is by far the largest, and worth seeing for that reason. I was glad I took the shuttle that far in enough to see many different types of ecosystems that make up the park. However, it was hot, muggy, filled with mosquitoes, and by then the clouds had got caught up in the mountains hiding them from view. I decided to take the bus back to the visitor center and do some hiking from there. The great thing about the shuttle buses is that going out of the park they'll pick up anyone they have room for. I could take my time hiking along for a few miles keeping the road in sight, and then catch a ride when I got too tired or it started raining too hard. Once I rested up and the rain slowed, the drivers would let me off so I could hike some more. It was definitely the best way to see and experience as much of the park as possible given my time limit.

I got back to our campsite after 7pm. By the time I got a shower, it was raining way too hard to cook dinner outside. I had lived off nothing but trailmix all day, and I really wanted a warm meal. Orion had been talking to the park staff, as he's want to do, and they had recommended a local restaurant and bar called the Salmon Bake, so we headed into town. Since we're in Alaska, I had a halibut burrito and an amber from Midnight Sun Brewery. It was the second to best meal of the trip so far. The house burrito and an amber ale seem to have become the standard meal I order to judge any eating establishment. No complaints! Eat well. Be merry.
Sent via BlackBerry by AT&T