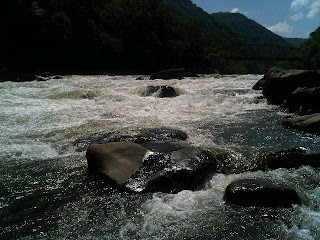 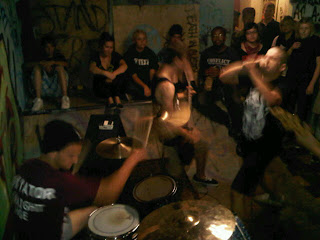 Got breakfast at my favorite place near where we raft, Cathedral Cafe in Fayetteville WV. Figured I had some time to kill, since it would only take six hours or so to get to Indianapolis. So, I ate leisurely, mailed some postcards, and headed to the bridge and canyon overlook. That particular section of the New River Gorge is a National River and Scenic Drive. At the visitors center, I realized I had never really done the drive. The rangers supplied me with a free map and audio tour CD, and I set off.

It was one of those completely great, random ideas. I got to see my favorite rapid on the New River from the shore for the first time. The photo doesn't really capture the scope, but it's got a huge wave train that's nothing but good wet fun. I also took a side hike past some breathtaking no-name waterfalls to an abandoned mining town. There was a constant, eerie breeze coming from the barred up shafts, like the mountain was breathing memories. The entire four mile trail was deserted, and so quiet a fox crossed my path. This is why I love West Virginia.

I went through Kentucky to get to Indiana, but the impromptu gorge trip took so long I was running too late to visit the many bourbon distilleries.

Got to Indianapolis 'round 8pm. I went to catch Cut Short, a DE band I'm friends with, play a house show on their midwest tour. The Indiana local music scene never cease to surprise me. The show was in the basement of a heavily tattooed and inebriated guy in his 30s. Every inch of the walls were graffitied, and a quarter pipe took up almost the entire area the bands had to play in. Never mind that the ceiling couldn't have been much higher than eight feet. Cut Short played a tight set in the pipe until the only guy actually dancing took out the drum kit and the guitar amp in one swift move. DE hardcore straight repping. Much love to Tyler and Garrett for being familiar faces in an otherwise strange land.

Tonight is my first night being hosted through CouchSurfing.org. My couch surf host met me at the show, and embraced the new scene with enthusiasm. He's a philosopher of the Emerson persuasion, and currently a few beers deep. The conversation is excellent.
Sent via BlackBerry by AT&T