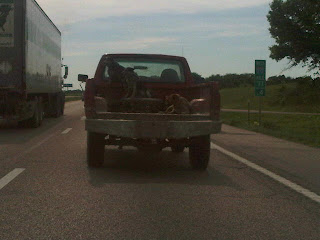 Things got a little too weird even for me last night after I posted. Nothing bad happened, but I wish my first couch surfing experience had been better. My host was obliterated, and I was thankfully dead sober. I don't think he had any comprehension of the situation, and proceeded to say some really inappropriate things while acting somewhat bizarrely. Just to be extra careful and safe I slept fully clothed and packed with my Leatherman in hand. I woke before dawn, texted my goodbye, and bounced. Chalk that up as yet another travel story involving crazy people, who all too frequently are from Indiana.

That whole experience combined with a couple other incidents already on this trip, have really stiffened some resolutions I had been forming. First, I'm taking a vow of celibacy. In the immortal words of Kerouac and Bell Biv Devoe respectively, "pretty girls make graves" and "never trust a big butt and a smile". Second, unless I'm at a home-away-from-home or with best friends, I'm staying straight. These sort of adventures already have enough surprises and twists without me inviting trouble in with open arms.

Most of today was rough. I spent a lot of it hungry, tired, lonesome, and delirious driving through the Mississippi valley heartland. It's nothing but alternating patches of corn fields and strip malls set on the banks of lazy, muddy rivers. The highway is one straight, mostly flat shot towards a blank horizon hazy with humidity. Bordering the road is a never ending chain of billboards set at regular intervals to advertise the same corporate brands. I think there might be more McDonalds than schools in this country. At least it's verdant, but the endless swaying green is too hypnotic, and makes me dangerously narcoleptic.

I was running on a couple hours of uneasy sleep, and was in such a rush to get over the Mississippi that I forgot to eat anything that could be called a real meal. All morning it drizzled, and I got dressed and brushed my teeth at a rest stop in Illinois. My passenger seat seemed horribly empty, the void of my heart. By Saint Louis I was meandering erratically, near tears, and talking to myself. It took a monumental amount of resolve and control, but I finally pulled over, ate a sandwich, took a nap, and felt considerably better. The only thing that hasn't been remedied is my desire to be comforted. No matter how much better I take care of myself, I still can't hug myself. There is a good man out there, who might even read this, and if he does, he'll probably know it's about him. I want him to know that I miss him. I'm sure he'd have plenty of good advice for me right about now, and he makes me feel safe.

A little right of Kansas City I stoped at a rest area, and talked with my best friend, Em for a bit. That finally gave my perception a swift kick in the right direction. As I headed into Kansas, things started looking rosy again. I'm trying couch surfing again tonight, this time in Lawrence. So far everything's going much better. It's a hip town, and I've met a bunch of fellow souch surfers.
Sent via BlackBerry by AT&T