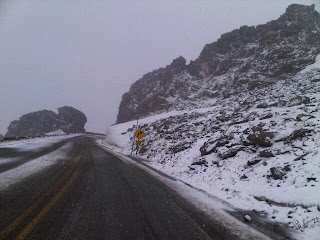 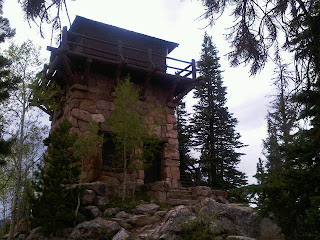 Camped at around 9,000 feet, and when I woak up it was only a few degrees above freezing and still raining. I could see my breath, ao I decide clean, warm, dry clothes and some hot coffee was imperative before anything else. After I made a fine brew with my camping stove and french press, I packed everything up wet, and headed out.

Planned to drive the main road through the park, and stop at the visitors center near the highest pass to ask for recommendations. But as the road climbed up past 10,000 feet, it started snowing. About eight miles in the road turned to grooved gravel, and the snow started sticking. I couldn't see more than 50 feet, but I could tell the road was still sloping upwards along a narrow ridge. On either side there was a steep drop into alpine tundra. The road peaked at over 12,000 feet right before I reached the visitors center, which had been closed due to the weather. At that point there was nothing to do except start driving behind one of the plows, and get off the mountain. The road started declining back into forests, became paved, and around 9,000 feet the snow stopped accumulating. I hadn't seen any oncoming traffic for miles, and eventually found out they had shut down the road less than an hour after I had gotten on it. It just might have been one of the most challenging drives I've ever done.

At a warmer, sunnier elevation on the other side of the range, I decide to take on a challenging hike with an 1,000 foot gain, five miles up and five back, for the afternoon, because the intense drive had made me antsy. The destination was an old fire lookout at the top of Shadow Mountain. The trail started at Great Lake and went up through a series of long switchbacks. The pines along the path were tall and skinny. They creaked and clacked against each other at the slightest breeze, speaking tree talk. It was in a less popular area of the park, so fairly deserted, and there wasn't much to see along the way. I fell into a methodically quick pace, letting the physicality wash over me and set my thoughts wandering along other unseen paths. The lookout was a sturdy, two-story, uncut stone and rough log affair that didn't look like too bad a place to call home for the summer. You couldn't go inside, but the upper outside balcony was accessible. At the top I pretended I was Kerouac in his Desolation Angel days for awhile before starting down.

Again, planned to head directly back to the interstate, hustling through the evening and into the night until I reached the Utah state line and Arches
National Park. Ah, the best laid plans of mice and men! Planning it seems only leads to more ridiculously intense drives. It started raining again as I got under way, and my GPS directed me to twenty miles of damaged dirt road that was shot through with red, muddy rivulets, following the ledge of a canyon above the Colorado River. Even I-70 was flooded around Glenwood, and debris from falling rocks littered the shoulder.

It finally stopped raining as I dropped down to 4,000 feet, and more aired lands. Started to get tired after I crossed into Utah. Just pulled off the road a little north of Moab for a short safety nap under a nighttime sky that's sparkling only as it can in the desert.
Sent via BlackBerry by AT&T