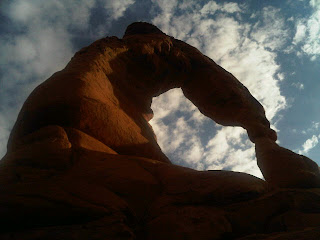 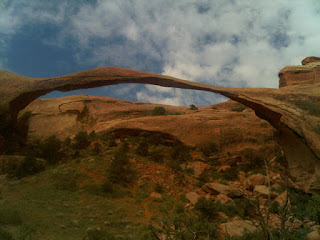 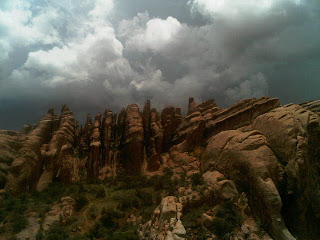 Slept a couple hours in my car on the side of the road, but decided any longer wouldn't be safe. Headed in to Moab where the only thing open at 3am was Denny's. For the cost of an endless cup of coffee Mark, a waiter with all the niceties of a good Texan boy gone hippie, let me hole up for a few hours while I read up on guide books and cleaned up in the bathroom.

Headed into Arches National Park an hour before dawn. It was still dark when I got to the Delicate Arch trail head, so I took another nap. Woke up shortly after sunrise and set out to hike. The trail was about a mile and a half one way with around a 500 foot gain, not bad for a morning workout. For the most part it headed upwards and due east, so it felt like I was climbing to meet the sun. When I reached Delicate Arch it was deserted and perfect. I got right up underneath it for some sweet photos like the one above.

Hiked back down to my car, and hightailed it to the Devil's Garden area in hopes of beating the crowds and heat. Saw most of the key geographical features including Tunnel Arch, Landscape Arch, Double O Arch, and Dark Angel. By noon it started getting too populated for my tastes, so I decided to try my luck on the Primative Loop trail.

An over seven mile hike through sand, and climbing over steep ridges and boulders on a couple hours sleep is hard. I was already having to take it at a slower than usual pace, when things got really difficult. A short rainstorm came out of nowhere when I was at the most challenging section. Ran into the two groups ahead of me when the father of one family nearly fell of a narrow ledge and had a panic attack, effectively blocking the trail. It was a good thing I was in a group after that, because we soon came to a spot where you had to cling to a sheer cliff above a six foot drop into a deep, stagnate pool of water. If there hadn't been a hand to grab mine at the other end, I would have fell and swam. Of course the storm broke when I got back to my car. Still, I finally had to give up on the park, because it was just to busy.

Left to scout some public campgrounds, book a raft trip, and find a good cup of coffee. On a recommendation, I went to NAVTEC Expeditions to check their offerings. I wanted to do a one day raft trip through Canyonland with 3+ class rapids, but apparently the next trip isn't until Tuesday and too expensive. When the guide saw how disappointed I was, and got an idea of my experience level, he offered to let me rent an inflatable kayak and tag along on an easier trip near Arches tomorrow, so I could have a little more fun on my own. Signed up, and I'm pretty excited. He said the Colorado's running over 30,000 cfs through Fisher Towers.

Still not sure how or when I'm getting to Canyonlands National Park. Or, where I'm sleeping tonight for that matter. Yay, adventure! Sometime this week I need to climb Half Dome in Yosemite, and get to Sacramento before my friend, Zach, gets tired of waiting for me.
Sent via BlackBerry by AT&T