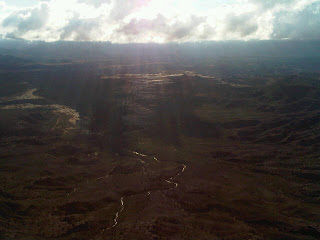 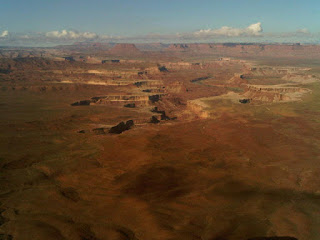 After I posted yesterday, I drove up to Canyonlands National Park in hopes of catching the sunset. The roads in the north section of the park seem to run mostly along the top of a huge mesa. The state road to the park climbs steeply before running through high, windy pasture land not more than a couple miles wide to the park entrance. at least from what I saw the park is mostly around 5,000 to 6,000 feet in elevation, but next door Moab is only at 4,000.

Turns out the 1,000 means drastically different weather. It was raining up there, and I couldn't see a thing. I was disappointed, tired, and still didn't have a place to sleep. It was so cold and windy I didn't want to pitch a tent. The campgrounds didn't have running water, and the fire rings didn't have grills. I just couldn't figure out what I be paying for, if I got a spot. I drove around for over an hour, and never saw a ranger, so I decided to try sleeping in my car on the side of the road. I fully expected to be woken up in the middle of the night by a ranger tapping on my window, but I got a solid seven hours.

Woke a little before dawn, and drove to Grand View Point at the very end of the road to watch the sunrise. There isn't too much hiking or points of interest in that park, but the views must be seen to be believed. Any of the overlooks will give you a view that you just have to sit with for a bit. To be quiet and watchful here is to commune with the very natural essence of this land. I made cinnamon oatmeal with dried cranberries and almonds for breakfast on my camping stove at the overlook. A feast for my eyes and stomach. Then headed out of the park, frequently stopping for photos and pondering.

Got to the NAVTEC headquarters around noon for a half day trip down the Colorado River. The rest of the trip went in an oar boat, but they let me take an inflatable kayak to keep things interesting. The stretch was mostly an easy float through class one and two water, but there was one class three rapid with several good sized holes followed by a huge lateral wave. The guide, Dan, was also nice enough to point out a couple surf spots, and pause to let me have some fun. Nothing challenging, but it was a good time with great scenery. I highly recommend NAVTEC to anyone looking to raft near Moab. They're small, flexible, and personable. Just how I like my adventuring companies.

Got off the river, and went to the local hostel for a shower. The Lazy Lizard Hostel in Moab is a straight up hippie affair, and they sell hot showers with no time limit for three bucks. Sweet deal. Went back to Wake and Bake Cafe to have coffee and their Jack Daniels Chocolate Chip ice cream for a second day in a row. Also quite recommendable. Now to hit the road for a thirteen hour straight shot to Yosemite National Park. I'll be using the coffee, drive, nap, almond butter sandwich, repeat method until I reach my destination.
Sent via BlackBerry by AT&T