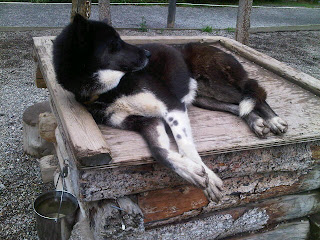 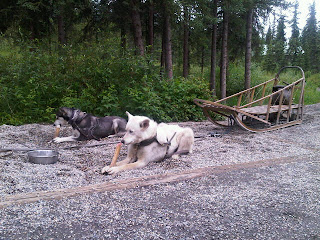 Spent the morning packing up and writing postcards. Went to the 2pm sled dog demonstration at the park headquarters kennels. The dogs were utterly lovable when they were resting, but as soon as they sensed excitement they spring up like a tightly wound coil, exuding natural strength with every movement of their lithe muscles. The park still needs working teams to blaze trails, transport goods, and patrol in the winter. Their dogs still thrill to be active and useful. For part of the demonstration, Orion and I were picked to pretend to be the lead dogs. It was touristy, but fun, somehow both ironic and appropriate. There's been so much sibling rivalry and revelry on this trip we'd either make the best or worst sled dog pair.

After I said goodbye to the dogs, we set out southward to Anchorage. A high mountain range hid the approaching city from view, dominating the horizon from as much as 30 miles north. Coming through the pass the air was so thick with billowing cottonwood seeds, it looked like it was snowing. We reached our couchsurf hosts in the evening, four roommates that all surf and host together. Definitely the sort of people we wish we could stay longer and become better friends with. They took us to their local watering hole, Taproot, where a live bluegrass band was playing and mostly Alaskan beers were on draft. Very enjoyable.

Orion's traveling style, desires, and motivations are very different than mine. It's cause a lot of conversations between us, and made me do a lot of thinking. I wish I could have some more down time to myself to solidify these passing thoughts into more tangible words.

I've officially figured out my farming situation in Homer. Adding to the long list of life dreams fulfilled on this trip, I will finally get to work on an alpaca ranch. I assume this will involve much shoveling and fence maintenance. Hopefully yarn for knitting too?
Sent via BlackBerry by AT&T
On The Road