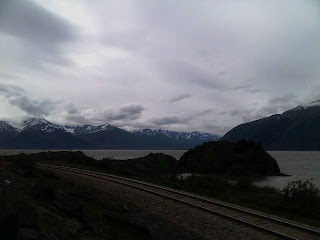 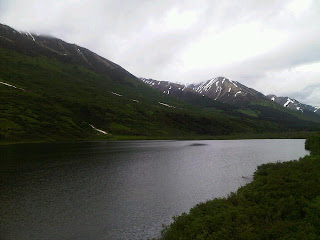 Said my goodbyes to my brother and Anchorage this morning and headed south towards the peninsula. I knew I'd be taking the Seward Highway, and that it was official scenic byway. So, I was looking forward to it a little, but nothing I read prepared me for the actual staggering beauty of it. It's up there with the Going-To-The-Sun Road, contending for one of the most impressive drives I've seen.

The highway and the Alaska Railroad hugged an iridescent bay that reflected the dark moods of an overcast sky billowing with rain clouds. On the other side of the road rose steep mountains, peaks still frosted with snow drifts, melting water coursing down their sides to form thin waterfalls. A similar scene was on display across the bay in epic, panoramic views. Eventually, the road left the coast and head through country that reminded me poignantly of Glacier National Park. Vibrantly grassy mountains kept fresh with snow melt from high up where the mists are forever caressing the craggy earth, valleys filled with picturesque pools that beg for cabins, mountain goats, and wildflowers to look like the high country of my bucolic daydreams. When the road split, and I took the southern route further along the western coast of the peninsula, it eventually started to look like a bigger, wilder version of Maine. Violet lupins lined the road for an eternity. In between rural fishing and moose hunting towns, you could catch a glimpse of the ocean. And, everything had the worn look of lands that weather harsh seaside winters.

My WWOOF host is named Kathy, and she lives about halfway between Anchor Point and Homer on a back road between the creek and the coast. The place is small for a ranch, but rather large by homestead standards. They have one cat, one steer, two horses, four dogs, a few goats, a few ducks, ten or so yaks, fifteen or so pigs, twenty or so chickens, and thirty or so llamas and alpacas. They process their own milk, eggs, cheese, meat, and wool. They also have a small vegetable garden, and run an occasional day care. It's incredibly sufficiently agrarian, and there's a ton of work to be done to keeping it running. Looks like I'm going to learn about training alpacas, baking bread, spinning yarn, and making cheese. I know it won't be easy, but I'm very excited for this opportunity.
Sent via BlackBerry by AT&T