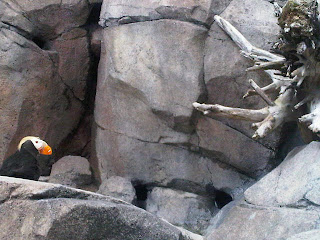 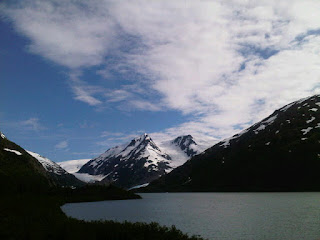 Woke up especially earlier, packed up my car, and headed into Homer to get breakfast at Two Sisters, an organic bakery that's a favorite among locals. I had the best sticky bun and hot chocolate of my life there. No lie. I got a scone for the road, and a shirt as my only souvenir from the peninsula.

Went back to the ranch for a cup of coffee, and all the many so longs that needed to be said. I must admit I was sad to leave, and it was especially hard to say goodbye to Kathy. Anchor River Llama and Alpaca Ranch was a whirlwind of an experience unlike any I've ever had before. There were so many memorable firsts and new skills learned. But of the utmost value, I got to feel useful, something this trip had previously lacked and I had yearned for.

The French couple had also planned to head out around the same time as me, and roughly in the same direction. They were going to hitchhike, but instead I offered them a ride. We drove north along the coast, and then headed east through the mountains to Seward, a bay side town on the other side of the peninsula. There we visited the Alaska Sealife Center together, and saw puffins, a sealion, seals, and many many salmon. Late in the afternoon we parted ways, and I set off to Whittier to catch my ferry.

Over land the only way to reach Whittier is through a one lane tunnel that serves traffic in both directions, including cars, buses, and the Alaska Railroad. The tunnel is closed at night, and takes turns alternating directions during the day. I finally had to pay my first toll of the trip. There was simply no way around it. It was over a mile long with rough cut walls that ran with snow melt just like the white topped peaks of the mountain range outside and high above. I think I can safely say it's the strangest tunnel I've ever drove.

Checked in for the Alaska Marine Highway System around dinner, and boarded the ferry to Juneau. Access to my car would be limited, so I had to pack up my backpacking bag with a couple days worth of gear. Then I went exploring the ship to orient myself, and find a place to sleep. I couldn't afford a cabin, so I claimed a deck chair in the solarium and laid out my sleeping bag. On the top deck, featuring panoramic views and access to a bathroom with showers, I prefer this to a cramped room anyway. So excited to set sail, and be at sea for a little while!
Sent via BlackBerry by AT&T