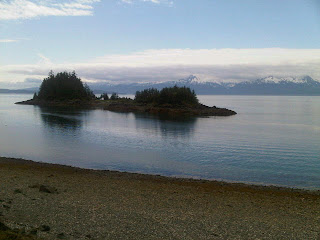 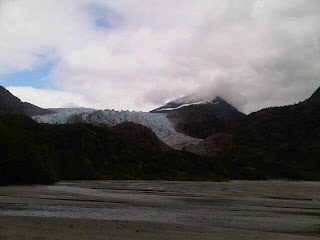 Whenever I'm on an interesting road I always want to drive it to the very end. In the main 48 that end could be hundreds of miles away, and I have to wrench my heart back from curiosity, and stay the course to my destination. In Alaska, where by sea or by air is the transportation standard, the roads are shorter and their ends are attainable.

The campground was too crowded and noisy to even make the free hot showers worth it. I quickly vacated for a smaller campground near the bay. Picked a spot I could smell the brine and hear the seagulls from, and set out to find the end of the road. It was a stunning coastal drive of island filled bays, spruce frosted points, and vibrant bunches of wild flowers. It ended at Echo Bay, a sheltered cove and evidently a local favorite fishing hole. Clearly an outsider, I received many askance glances. It wasn't quite what I was hoping for, but it felt good to find the end. So, I turned around and to try one of the many hiking trail turnoffs I had passed.

Still haven't got an official map for Tongass National Forest, so based only on a map of Juneau I picked the trail to Herbert Glacier. The first three or four miles was a fairly level, well maintained, gravel path through the woods, lined with wild raspberry and blueberry bushes. I picked and snacked, and tried not to dwell too much on its lack of challenge. When the trail finally opened up to a sandy river shore all misgivings were washed away at the sight of the glacier. The tip was a mile or more upstream, but it was still one of the most impressive things I've ever seen. So unreal you might think it was man made, but then comes the most humbling realization that this is natural. Glaciers are just one of nature's many great works of art. Is the sum of humanity's great feats and moments of crowning glory nothing more than an attempt to emulate a shadow of nature's inherent wonder?

Most people end their hike on that sandy shore, but some like me continue a mile or two further, drawn to be closer to the glacier. The last bit of trail was more than challenging enough to make up for the ease of the first. Marked by neon red ties on trees, cairns, or nothing more than footprints, it traversed expanses of sand and steep rock scrambles depending on whether or not the river banks were beaches or cliffs. It finally ended directly across from the glacier, separated by formidable rapids. So far that's the closest I've ever been to one. Now I'm filled with an overwhelming desire to touch that cerulean ice.

When I got back to camp I found someone had taken the ideal spot I had already paid for. I must admit I got rather upset with him before giving up for a much less desirable spot. I'm not sure I believe in karma or luck, but I started to feel remorseful, promptly broke my french press coffee pot, and then apologized to the man. Took myself to the shore and read some Whitman, while fish tried to fly for their mosquito meals and seals played in the shallows. Let it all go. Felt better. Bedded down. Now rest.
Sent via BlackBerry by AT&T