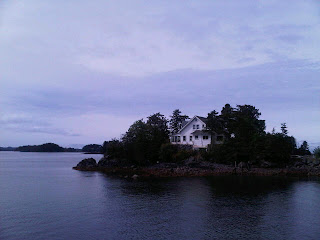 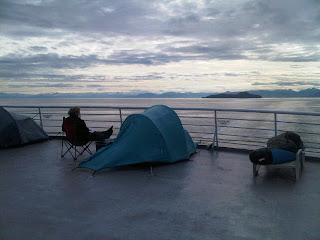 In early the morning the ferry docked at Sitka, an island seaside town. Since I had heard a lot of good things about it, I paid up to take a short tour bus ride the seven miles from the ferry terminal to downtown. Definitely worth it. The guide was a knowledgeable local, and I wouldn't have had time to walk or hitch.

I love places that are an unusual blend of cultures. Sitka is part Russian, part native, part American, and thoroughly interesting. I could have happily spent a couple days there, especially if I rented a kayak to explore the many tiny surrounding islands. Unfortunately, I only had a couple hours, and was restricted to a whirlwind walking tour of historical spots, artisan shops, and pretty coastal views. I'd either love living on an island for the independent, insular community, or go crazy over the lack of open road. Maybe I need a boat? I think I'll add living on an island to my list of things to try before I die.

We left port around noon, and continued southward through the extensive archipelago of southeast Alaska. The rough tops of mountains rising above calm waters as far as the eye can see. Every time I start to think my eyes have grown used to such beauty, we turn a cape and I find some new scape still has the power to make me pause and take it in.

I've been rather standoffish to strangers on this trip, partly due to a desire for solitude and partly due to safety. It ain't always the best idea for a gal traveling alone to be too forthcoming or friendly. Still, I've seen many of the same people from the first ferry ride at the Juneau campgrounds and now on this ferry. We all seem to share the same ailment of itchy feet, the love of travel. I've started opening up, and we've started swapping stories. Hey ho, adventuring we go!
Sent via BlackBerry by AT&T