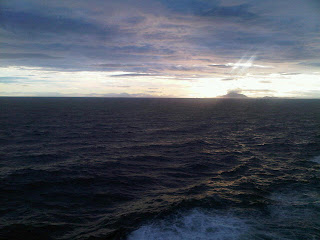 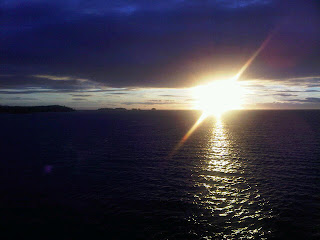 The first night I slept in the recliner lounge out of a desire for cushions and warmth. But, it was uncomfortable, stuffy, and noisy. Last night I managed to snag a spot in the solarium. On this ship the solarium has two sides of windows, one steel wall, and the fourth side is open to the deck where people pitch tents. Heaters are suspended from the ceiling. The open side faces aft, and beyond the railing the tents tie to is an pure, unobstructed view of the passing scenery. I was worried about being cold, but the heaters are quite effective. I was worried about being crowded, but there was a spirit of goodwill that permeated the space, lending it the air of a sleepover. Around 4am it began to rain, and everyone made space under the heaters for those who had been laid out in sleeping bags on the deck. Very little grumbling among fellow adventurers.

In the morning we reached Ketchikan, the southern most city of Alaska. I walked the several miles into town to check it out, but downtown was touristy, the weather was dreary, and I was already beginning to feel the affects of fasting. I mostly wanted to shower, knit, read, nap, and think. After only a couple hours I returned to the ferry. Almost the entire day was spent in port doing the common meditative tasks I that make me simply happy.

I have only four days left to decide whether to attend or defer USC for grad school. That's what I should be ruminating on, and I do. Still, I often find my thoughts drifting to my loves and friends. What are they doing? How do they fare? Are they laughing or crying? Who are they loving? I wish I could be with all of them at once, but they are scattered. Remembrances of my past lives and travels, or because they also have a little gypsy in their soul. I think of my friend fixing trails in Arizona, of my friend in Virginia who just lost her brother, and of my brother hitching under westward skies. O my utterly amazing friends! They are writing songs, creating art, traveling roads, patrolling beaches, fishing, teaching, helping, sewing, building, getting by in big cities, trying to figure out this whole business of being grown up. I miss and love them dearly all.

Today we were treated to a mad, great glorious sunset as we entered more open waters. The ship started rocking over white capped waves in that way that so delights and excites me. The horizon was hazy with fog. The sea was shining like the scales of the many fishes that fill it. The skies were clearing, dispersing clouds in many shapes and densities. And, the miraculous sun kissed it all before it tucked itself to sleep.
Sent via BlackBerry by AT&T