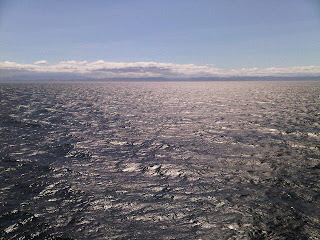 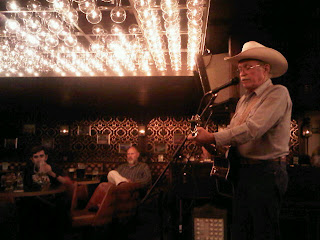 When I woke up in the middle of night last night it was actually pitch black on the other side of the railing. I haven't see the depths of night like that in almost a month. Today it seems the weather has broke for good. It was sunny enough this afternoon that I and a couple other passengers laid out to soak in some vitamin D despite a good breeze off the port side. All signs suggest we are approaching the lower 48! Sometimes it's been so cold and damp on this trip that I've feared I was missing summer. So it's quite possible that I'm looking forward to the familiar sweltering summer weather of the mid Atlantic seaboard. Take me to sandy beaches to tan these bones!

At the Juneau terminal I had ended up in a conversation with an older gentleman in a cowboy hat and boots, who spoke with a bit of a twang. He mentioned that he had given an impromptu performance in the bar on his trip up. Ever since some of us have been talking him up to another show. Last night, last chance. We informally agreed to convene at 8pm, and were treated some real quality country music. He commanded the nonexistent stage like he had owned it for fifty years, which he had. Played a song he won a talent contest with in 1953, and talked of touring in 1971. He knew every hit, joked with his wife, and dedicated Spanish Eyes to me. The whole bar was in an uproar over him, swapping drinks, clapping, and hollering. We got so rowdy the captain sent word to the bar keep to quiet us down. He'd been playing for almost two hours, so he wrapped up his set. Still a lady about my age got up the courage to start softly playing the piano and singing. She was equally talented, and had been encouraging others to accompany her. The gentleman cowboy, a woman with a kind smile, and even I braved some improvised covers. Open mic coffee house on a boat! And, we weren't half bad, if I do say so myself.
Sent via BlackBerry by AT&T
On The Road