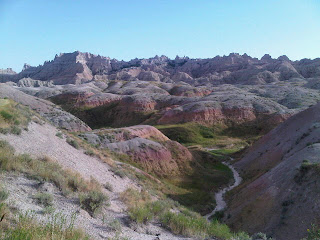 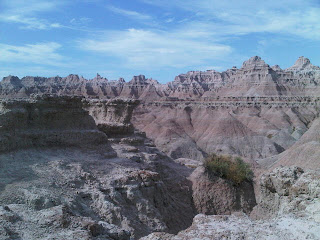 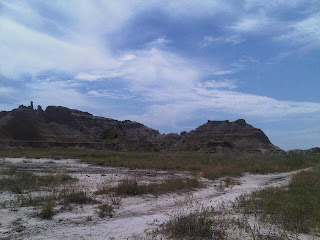 It was so warm and arid that I decided to sleep under the stars. Each campsite had a picnic table with a bit of an awning. Just rolled my sleeping bag out on top the table to escape the crickets and rattlesnakes. A cool breeze picked up round midnight. I snuggled down and gazed out at moonlit mountains as rabbits and birds slipped by in the night. Through the wide slats in the awning I could make out familiar constellations of summer skies above. Lovely.

Rose with the sun, feeling superb. Didn't have to bother with packing up a tent, just set off to explore as much of the park as I could before it got too hot. Took an 8:30am walk and geology talk with a ranger. Did three real short, highly recommended hikes, the Door, Window, and Notch trails. The first two were crawling with tourists, but the last was rough enough to keep a lot of the crowd at bay.

The heat is exhausting. I couldn't have hiked more than three miles, but it felt like ten and I drank a liter of water. Still wanted to see more of the park and escape areas favored by tour buses, so I sucked it up for another hike.

The Saddle Pass Trail is only a quarter mile, but it probably has a 500 foot gain. Takes you up a ridge, past rock formations, and then clears the edge of a massive plateau. Expansive prairie lands hung high over the surrounding terrain. Walked around a little, but eventually conceded to the environment. I had a long drive ahead, and couldn't afford to exhaust myself going head to head with nature.

Badlands is by no means barren, but in many ways it's the harshest environment I've ever been in. The land is disintegrating into dust. An eternal winds howls through the rocks. Summer temperatures average in the upper 90s. Most plants and animals stay small to survive. Still, it's more humid than a desert, and less shaded than the canyons of the southwest. Rough. It's hard to imagine living out here without complete modern conveniences.

After noon set out to Sioux Falls for a desperately needed oil change. In an effort to avoid bad weather, bad drivers and tolls, I left 90 and went south to catch 80 east near Omaha. I don't know if I'm too dirty to sleep, too caffeinated, or if the cooler night is just that refreshing, but the insomnia is back. Nap and drive method through to Chicago, 'cause I couldn't rest anyway.
Sent via BlackBerry by AT&T