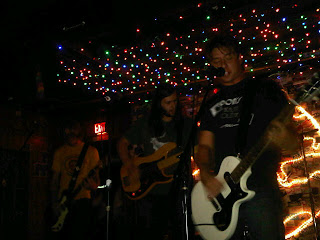 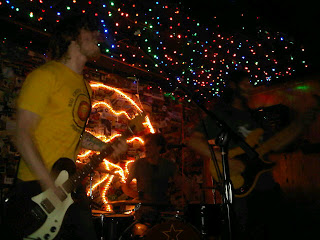 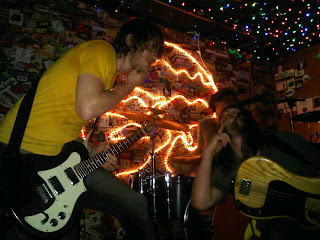 Holy moley. Long day. Woke up early in Chicago after only a few hours of sleep. Went to a diner with Raija and Ben for breakfast that clearly had remained untouched since the 1960s. Everything was smothered in butter, which made the grits extra tasty. They left for school, and I hung around a little bit figuring out my game plan, waiting for traffic to die down.

Rolled out. Drove south along the lake shore listen to mad decent public radio for the first time in a long while. Discovered Vocalo. Quite possibly the best radio station ever. The content is mostly listener generated, youth oriented, provocative and intelligent. When I tuned in they were having a conversation about interracial dating. Intrigued with nothing better to do while driving, I called in. Ended up talking to the host about my experiences for a solid ten minutes on air. Ha! Never done that before. Hopefully I pulled it off with a modicum of finesse.

My friend Dave's band, All Dinosaurs, are out on their first tour. In the evening I met up with them in Columbus, Ohio where they were playing a bar called the Treehouse. The main room actually had a tree growing through the middle of it. Too big for me to wrap my arms around it, I thought it was some sort of appropriately random pillar in the rambling architecture of the dive until I felt the bark. It was my first time seeing All Dinosaurs. Dave is so stoked about the music he's making now, so my hopes were high. Still, they blew me away. Tight, fast, catchy punk with a perfect attitude of screw you, good dirty fun. I've got to bring them to my local scene. They'd love 'em hard. I wish I could see them play again soon, but unfortunately they're based far away in Cleveland.

The combo of Ohio, Dave, rock and roll, fellow music nerds, and friendly dive bars always and inevitable ends in inebriated shenanigans. It's a fine tradition we've been practicing for several years now. There was a dollar beer special, and I quickly became embroiled in the band's good natured ball busting, and hashing the details of music equipment. Usually it goes down in Cleveland, but Columbus ended up serving sweet times too. I'd never really been, but it has that college town vibe I'm such a sucker for. Hooray for friends! Hooray for punk rock! Hooray for whiskey!
Sent via BlackBerry by AT&T