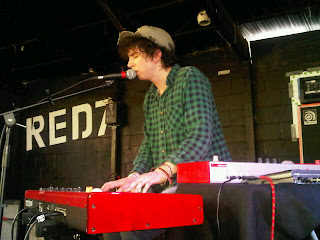 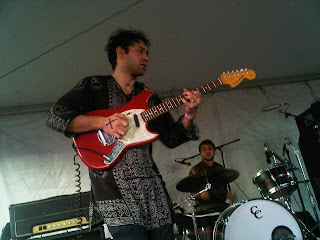 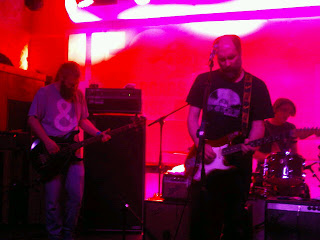 Got started nice and early on Wednesday, my tiny heart filled with eager ambition. I went to a fantastic panel about crowd-sourcing that was moderated by the owner and founder of RocketHub, and chock full o' facts to spark my imagination on new projects for the radio station. Then I watched I guy from the BBC debate a guy from the CBC about the role nonprofit state media, and the appropriateness of public, private, and corporate funding. It was interesting, but so far removed from the funding and structure of NPR and PBS that I found little applicable to American public media.

There was a short break in between panels, so I ran down to the exhibit hall stage in time to catch Dustin Wong play a couple songs. Under the stale florescent lights on a stage of pieced together risers wearing only socks, no shoes, Dustin Wong looped and layered his guitar in to complex songs as he sung with every fiber of his being. I could not believe the handful of suits watching the performance were just sitting in their conference chairs unfazed, but Wong did not seem to mind at all. Perhaps they didn't get it, but I think you would, dear readers. He just released his second LP, Dreams Say, View, Create, Shadow Leads, and you should listen to it. After his performance, I approached Dustin Wong, and told him how popular his new album's been at the station. He was warm and courteous and flattered. Hopefully, we'll get to interview him on air soon.

I had time to catch one more panel, a rather too introductory level discussion on the potential of the new gift economy and giving music away for free, which somehow developed into a heated diatribe about the evils of SOPA and internet regulation. I generally agreed, but no revelations were had, since they over simplified the issue. Feeling like I had maximized the academic and professional potential for the day, I headed out in search of good new noises.

I was all kinds of stoked to finally see Youth Lagoon, one of my favorite new artists from 2011. To flesh out his bedroom project for the stage, Trevor Power's was joined by a friend on guitar, both had tattoos of their home state, Idaho. I think they must have been friends for sometime, because they had an unspoken rapport and communicated much with simple looks. Their performance was pristine. Somehow they managed to transform the humid back patio stage buzzing with conversation and music from the indoor stage into an intimate space resonating heartfelt sounds with clarity. I could listen to Youth Lagoon forever.

As soon as their set was over I had to jet over to the SXSW Throwdown showcase that KXSC Radio was sponsoring. Thankfully got there just as NO was taking the stage. The word post gets thrown around a lot when describing genres these days, and could easily be thrown at NO. Indie new wave for a new century with the droning vocals you might expect, but really these guys are carving out their own sound. With a recent Daytrotter session and Time Magazine review, they are definitely worth checking out now so you can brag that you listened to them before they got huge. I also took the time to watch the Allah-Las. I love that at least one band is brave enough to try and bring back garage surf rock. They're are deliciously adept at it too. Finally, Unknown Mortal Orchestra took the stage to headline. I had absolutely no qualms about standing front and center, while everyone else hung back with arms crossed looking cool. Their self-titled debut album was also one of my top 20 of 2011, and I hadn't seen them live yet. Despite being exhausted from another show they had just played, and the terrible sound at the venue, Unknown Mortal Orchestra did their best to deliver a memorable performance. When they couldn't hear themselves in their monitors, they pressed on, improvising some insane solos and extending some jams. I hope to catch them in more ideal conditions soon.

I got to catch up will all the other kids from the radio station in between sets at our showcase, but they all had different goals for the evening, so I set off to catch CFCF open for an electronica showcase. In all my hustle I ended up being the first person their. CFCF, the stage name of Mike Silver, was set up on a table to the side of stage, and even though I was the only person in the room and the lights were still on, he pensively started mixing. As people dressed ready to rave slowly trickled in, mostly ambivalent to the quiet, unassuming DJ in the corner, I stood transfixed. Like a painter at an easel, CFCF intently spun out music, settling in and doing live remixes of some of my favorite tracks of his. I deliberately and ardently thanked him at the end of his set, and set off in search of more music.

I tried to catch Fiona Apple with Sharon Van Etten and Andrew Bird, but the line wrapped around the block. I gave up and went back to the convention center to charge my phone and explore alternatives. Finally deciding that Youth Lagoon were so purely fantastic that I had to see them again, I headed to the Boise showcase. The place was packed, but I managed to get a drink and wiggle my way to the third row from the stage. After making friends with the 6 foot plus group of guys in front of me, I slid a little closer to achieve an unobstructed view (props to the guys, a band from Alaska called laVoy. Dig the album). The band playing when I arrived were surprisingly good. Mature, tight, original, 3-piece indie rock with a female vocalist that claimed the stage like it was her sonic kingdom won in battle. I found out later that I had witnessed Finn Riggins, and have been enjoying their recordings since. Next, Youth Lagoon took the stage, once again sending my soul into bliss as I and the guys from laVoy sang along to "17". Despite it being their second show of the day, they were once again impeccable and endearingly earnest. Of course, I had to stick around after they played to catch the headliner, Built To Spill. The bio for band on the SXSW schedule said only this, "Built To Spill is still a band". Given that I've been listing to these guys for over a decade, and they now have long beards and receding hairlines, it was quite the sight to finally see them perform. Keep It Like A Secret will always be my favorite album no matter how much new material they write, but the fact remains that Built To Spill is still a band, and they've still got it. They held the crowd in the palm of their hands, and played like they loved every moment.

It was 1am, but there was still tons of fun to be had. I back up with the radio kids, piled Candice, Alex, Michel'le, and Kyle in my car, and headed for a house show my friend's band was playing near the UT campus. I had no idea what to expect, but we were delighted at what we found: a block of a couple co-ops all hosting shows. We walked in and joined the friendly, inebriated kids, who were all more than ready to dance. A local band called The Preservation took the stage when we arrived, playing sweet, catchy songs with just the right amount of country leanings. We loved them so much that we had to get their album to bring back to the station. Sun Hotel finally launched into their set at 2am. I've raved about their 2010 album, Coast, on here before. They've since changed their sound to be a little darker and a little stranger, but I still love them tons. Based in New Orleans, I was thrilled that they had toured on out to SXSW for several unofficial shows. They managed to bust out three new songs with electrifying energy before the cops showed up and declared it bedtime. Before we left Alex and Kyle took a turn on the double-seat swing hanging from the huge tree in front yard before heading back to the house happily yawning.