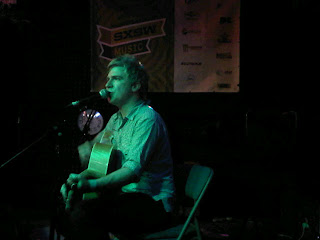 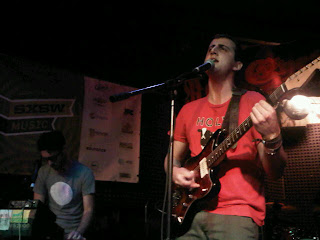 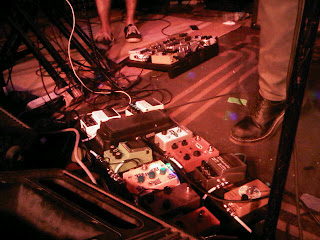 Since I had zero interest in the activities surrounding Bruce Springsteen's keynote speech, Thursday got started late. After the marathon roadtrip to Austin, the hectic schedule of panels all day and showcases all night was wearing me out. I wasn't sleeping well and I felt as thin as paper. I meant to get to the convention center by 1pm, but the afternoon traffic and parking was so congested, that it took four times as long to get there than usual. I ended up missing the first panel I had wanted to go to, but learned an important lesson about getting to downtown as early as possible during SXSW.

By 2:30 I was finally situated at the panel on independent managers. Over the years I managed a lot of local bands with varying success, but always gotten tired of negotiating expectations on that long scramble towards the glimmer of fame. However, hearing these super intelligent, awesomely experienced managers talk about the future of the industry once again sparked my passion for managing. The industry requires more work across a broader range of artist's interest than ever before, but the reward of supporting new talent and getting your hands dirty can be ample compensation. The next panel was a depressingly accurate portrayal of how advertising has taken over some of radio's role of finding and breaking new talent. I don't care if it's become more legitimate and a viable source of income. It still leaves a slightly sick taste in my mouth.

The panels wrapped up around 5pm, and I dashed over to Pitchfork Day Party to try and catch the Cloud Nothings headlining. Sweaty, partied kids spilled out of the venue on to the street, jovially coveting water bottles. The line wasn't too bad, and I got in just as Cloud Nothings were starting their set. The venue was muggy and completely packed, through a gap in the bottles from the other side of bar I could just make out Dylan belting out his angsty lyrics. Given that I had been front and center for their show in LA two weeks prior, it was a less than moving performance. Still, out of devotion to the band I stayed to the end.

For dinner I met up with a couple of the girls from the station at Ironworks, a famed BBQ joint that Kat B had been raving about since her last visit to SXSW. I'm usually a vegetarian, but I decided I probably wasn't fully experiencing the spirit of Texas, if I didn't eat BBQ at least once during my stay. I must admit that I got a pork sandwich, and enjoyed it thoroughly, thick slabs of supremely moist and tender meat smothered in the house sauce to taste with a pickle and potato salad on the side. I didn't think I could handle red meat, but the other girls got brisket or ribs and declared them divine. Local food win.

As the food coma took over and the heat of the day dragged on, I decided to go back to the house for a nap before delving into the evening's entertainment. However, once I settled in it was hard to get moving again. I was seriously considering not going out at all, and missed several shows friend's bands were playing. After two naps and the cool weather of 10pm finally set in, I was finally motivated enough to go see some music.

First stop was the Barsuk Showcase, which was pleasantly full, but not crowded. The bar was already implementing a one-out-one-in policy, but since I had a full badge I got in quickly. Despite the high security, I easily got a drink and slipped to the front. I was delighted to find that things were running late, and I had actually arrived in time to catch Nada Surf giving a special acoustic performance. I've been rather thrilled that this band's had a resurgence from the 90s, and emerged making music better than ever before. The crowd was a little older, definitely original fans of their 1996 release High/Low. However, there were also a fair amount of early twenty-somethings equally as ardent, who sang along to songs off their 2012 release The Stars Are Indifferent To Astronomy. The performance was relaxed an intimate. Matthew Caws joked with the audience, took a request, and humbly thanked Barsuk Records and their fans. It was perfectly wonderful, and I felt lucky to catch them.

After Nada Surf was done the venue cleared, and rather surprised and I moved front and center for Cymbals Eat Guitars. I've been a fan of this band for several years, but for some reason I hadn't seen them live yet. As they set up their oodles of pedals, a few more people trickled in. Finally the band awkwardly introduced themselves, and launched into a thrilling, high energy performance completely with technically mind boggling solos. They played like the room was packed and a pit was in full swing. I was one of the only people singing along, and definitely cared more than anyone else in the audience. Although it was nice not to get kicked in the back during the show, I actually wished the crowd was moved to match the energy of the band. It was a bizarre show experience, but I didn't care. I finally got to see Cymbals Eat Guitars, and they lived up to my every expectation. Afterwards, I thanked them personally, and they were quite nice and down to earth. Go buy their new album Lenses Alien, one of my top 20 albums of 2011.

Next, I rushed over to the Mexican Summer Showcase to catch Oneohtrix Point Never headline. Their was a small but dedicated crowd gathered right in front of the stage where an unassuming, slightly nerdy looking guy was setting up his laptop and equipment. It was a weird bunch of fans, many looked like they listened to more dubstep than experimental strains of electronica, and several were obnoxiously intoxicated. With a slight nod to indicate he was ready, the venue was plunged into darkness, as Oneohtrix Point Never began to weave tones and noises by the light of his laptop. His concentration was finite, and in my exhausted state I could have easily let myself drift off into his soundscapes, but drunk kids kept on interrupting with shouts of encouragement. For his last song he tried to use his mic, but the sound guy had lapsed into indifference and was completely unaware of the performance. Once again, it was a weird show experience, but I didn't care, because the music was so good.

Once again I was one of the last people back to the house. I tiptoed in past the mounds of sleeping bags, and wrote down my schedule for the next day as I brushed my teeth. Then I poured myself into my little tent in the backyard, and fell asleep immediately despite the loud hum of the air conditioner kicking in.