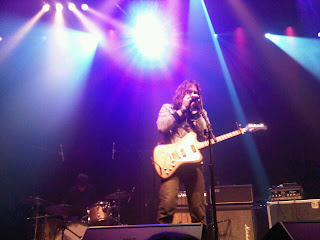 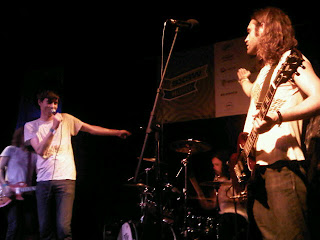 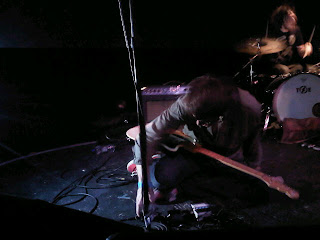 Friday, March 16th at SXSW 2012 may have been the best day of my life. Got up early and made it to the convention center before all the traffic. Went to a pretty good panel on publishing, a great panel on home recording, and a superb panel on the power of radio to break bands. One of my industry idols, Bruce Warren, was a panelist, and I was fan-girl enthralled to meet him. Bruce Warren is the executive producer of World Café Live, and program director at NPR member station WXPN in Philadelphia. I grew up listening to him on the radio, his taste in music is delightful, and he has my dream career. Watching him discuss the future and power of public radio with Jim McGuinn from KCMP The Current was like catching pearls of wisdom and promise as they dropped from heaven. Radio is best local, radio hosts add soul, and NPR numbers are on the rise. O' sing the good word!

Next, I went to a panel on the rise and changes classical music is undergoing, and found even more NPR idols. I discovered that Ed Ward, music critic for the NPR show Fresh Air, was moderating the panel that also featured The New Yorker's music critic, Alex Ross. Surprisingly, the "They Used to Call It Classical" panel was packed, and tons of people lined up to ask questions. As more and more pop musicians got to college to get degrees in music, we can definitely expect more of a classically trained approach. Chamber pop is gonna get big. Go listen to Julia Holter. After the panel I swung by the bookstore to pick up a copy of Alex Ross' latest book,Listen To This, and got him to sign it. Beaming joy.

There was a break in between panels, so I went to check out the Radio Day Stage on the second floor of the conference center. In 2003 when I finally got to start going to shows at big venues instead of just the DIY shows around my hometown, I was listening to Sha Sha nonstop, and went to see Ben Kweller live several times. That might have been the last time I paid a whole lot of attention to him, but his 2012 self-release and comeback attempt intrigued me, and I had to go see him play. Initially skeptical, I soon had to admit that he's still got it. I was singing along in no time, and was even inspired to stick around for Blitzen Trapper, a band that I always want to like more than I actually do.

All that before 3pm, and there was still a ton of awesome things left to do in they day. I went to the "Blood Music Sex Magick" to hear Andrew W.K. eruditely discuss the relationship between music and the occult. There I spotted Ann Powers, L.A. Times and NPR Music contributor, in the audience, and once again had a lapse in fan-girl moment. Next I went to a panel on band and brand alignment only to discover that Ann Powers was the moderator. What were the chances of our paths crossing twice in one afternoon? I simply had to introduce myself after the panel. We talked for 10 minutes before she left to meet up with none other than Alex Ross. Bliss.

I took an hour nap in my car, and then hoofed it over to the other side of the town to catch The War On Drugs open at the largest venue I had been to yet for a half-full crowd that didn't appear to be there to see them. The audience was a little strange, but the band sounded big, wonderful, and humble. All the drenched reverb of their most recent album, Slave Ambient, echoed through the huge, two-tiered venue perfectly forever.

I then ran all the way over back to the other side of town and the tracks to get to the Windish Agency showcase. I scarfed down some tacos, and got a little tipsy on Lone Star beer in time to rock the fuck out to Free Energy. A couple years back I used to see them play all the time in Philly, our shared stomping grounds. At times I've balked at what I perceived as gimmick in the band, but having them kick off the evening to my best day ever was ideal. Their new tunes slay it, and I finally realized that they were just there to help me have a freaking fun time. Continuing the day of fortuitous NPR encounters, I made friends with a videographer from member station KEXP, and we proceeded to rip open our hearts, souls, and the dance floor to Tanlines, one of my favorite new artists of 2012. That duo was followed by Maps & Atlases, who debuted sweet new music from their forthcoming album. The showcase culminated in an electric performance by Cloud Nothings that left frontman Dylan Baldi pounding on guitar pedals with his fists, and writhing on stage. Thank you Windish Agency for putting on what was probably my dream lineup of 2012, when I didn't even know it myself.