- October 22, 2016
Thanks to KXSC, I was able to go to Desert Daze festival, held at the Institute of Mentalphysics in Joshua Tree, California from October 14th through 16th.

Of all the sets I watched, I’ve picked my top three from each day of the festival to feature. Bonus: I took some photos that I’m rather proud of for your viewing pleasure. Enjoy!


SATURDAY
The Saturday schedule for Desert Daze started around noon, but things really didn’t pick up steam until the late afternoon, which was probably best for all the revelers that were out partying among the cacti until the wee hours. Here’s my review of the top three acts I saw that day.

The first artist I caught was Ryley Walker, who I had really wanted to see after falling in love with ‘Roundabout’, the single off his new album Golden Sings That Have Been Sung. I’ve described him as if Mac Demarco and Iron & Wine had a kid that really wanted to join jazz band in high school. His live performance was captivatingly endearing and attracted a sizable crowd even though many people in the audience had clearly never heard of him before. Walker was backed by a double bass, keys and drums, which were all wielded by talented musicians, who joyfully and vibed off each other. Walker seemed a little shy and awkwardly cracked self-deprecating jokes. When someone in the crowd shouted “I love you man,” Walker quickly retorted “I wish my dad had said that more then maybe I wouldn’t be playing this shitty acoustic guitar.” Later in the set he said, “Just tuned to drop D, so you know shits about to get real…that’s because my mom wouldn’t let me get a NOFX CD.” The crowed loved it, laughing and basking in jazzily improvised extended versions of songs. Walker and his band just looked thrilled and stunned, like they couldn’t believe they were there. The whole thing made for one of the best sets of the entire festival, in this writer’s humble opinion. 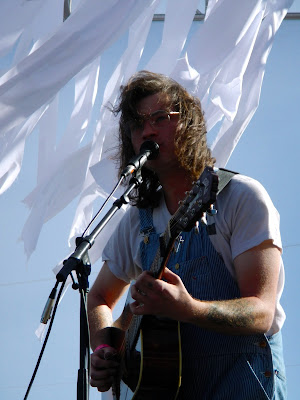 In a completely different vein, I caught The Coathangers, an all-girl punk revival band, later in the afternoon. Julia Kugel, a.k.a. Crook Kid Coathanger, who plays guitar, has impressively malleable vocal stylings, mimicking everyone from Elvis to The B52s. Likewise, the band’s songs reference a fabulous variety of punk-related genres and bands, while driving beats smooth things out into a cohesive signature sound. The trio had a lot of chemistry and camaraderie on stage, which incited a bunch of girls to open up a mosh pit in front of the stage #ladybonersforever! Though The Coathangers were all wearing matching cutup t-shirts with their band’s name sloppily handwritten in sharpie, it wasn’t all throwback and twee. When they screamed “Fuck You!” it was easy to believe they meant it. Clearly The Coathangers are well versed in unapologetically slaying it. 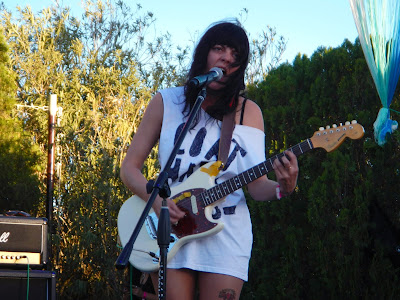 Saturday night closed with Godspeed! You Black Emperor headlining. I’ve seen them a couple times before, and I knew that nothing could top seeing them a few years ago in a starlit field in Big Sur. Still, their performance at Desert Daze was quite solid, and definitely made my top three for the day. The largest festival stage set up gave the performance more of an orchestral feel then when I’ve seen them in smaller, more intimate settings, but they had the same black & white found footage-looking background visuals. There was minimal stage lighting, but they played under the light of a full super moon, which certainly added to the ambiance. They played a lot of their two most recent albums, Asunder, Sweet and Other Distress and Allelujah! Don’t Bend! Ascend, but toward the end of the set they played ‘Storm’, a twenty two minute opus of a piece, which is also probably the best known work. The crowd of tired worshipers slowly head banging along exuded their appreciation, and Godspeed! You Black Emperor reciprocated by playing well past their scheduled end of their set at 1:30am and even obliged to an encore at the end. It was truly the perfectly blessed and meditative end to the second day of Desert Daze.