- October 23, 2016
Thanks to KXSC, I was able to go to Desert Daze festival, held at the Institute of Mentalphysics in Joshua Tree, California from October 14th through 16th.

Of all the sets I watched, I’ve picked my top three from each day of the festival to feature. Bonus: I took some photos that I’m rather proud of for your viewing pleasure. Enjoy!


SUNDAY
It felt like Sunday came so fast, and it was sad to think that it was the last day of the festival. I was not at all ready to go back to L.A. As far as daily lineups went, I think Sunday was the most consistently solid. I made the most of the day by rushing back and forth between different sets with no time to take in all the other fest sights. It was hard to pick just 3 favorites to review, but here they are.

Teebs from Flying Lotus’ Brainfeeder label played the first half of his set solo, quietly and unassumingly sitting in an office swivel chair while twiddling dials, tapping keys, and thoughtfully bobbing his head along. Calmly lost in his own world, making beats and noises, he seemed unaware that there was an audience, though he held them spell bound with the intimacy of his craft. Occasionally he would look up and seem surprised to find himself in a large tent with ardent fans, all either completely blissed out or holding their breath. I the second half of this set, he was joined on stage by a guitarist and MNDSGN, signed to Stones Throw, on keys. Together the trio did a fairly improvisational set, vibing off each other, and making giving cues with glances and nods. Teebs was very humble, complementing the other musicians, and thanking them profusely at the end of the set. 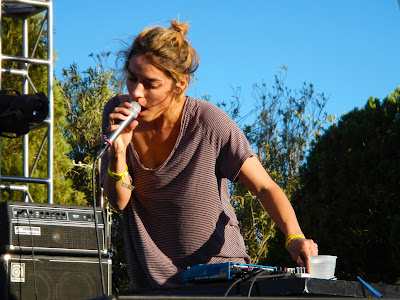 Probably my favorite set of the entire festival was Jennylee. Jennylee gained recognition as the bassist for Warpaint before releasing a solo album on Roughtrade last year. Performing solo she played guitar for the first song, but mostly focused on vocals, backed by guitar, drums and bass. This was perfect, since it allowed her a full range of expression, dancing about the stage and occasionally balling up as she howled into the mic. At one point she slipped her hand into the waitlist of her jeans as she effortlessly gyrated across the stage, and on the next song she looked half-crazed as she writhed around and flipped off the audience. Her sound reflected this dynamism, effortless blending sexy, hip-shaking basslines and pure pissed angst. In addition to having a great voice, Jennylee ran her mic through some effects, so she was able to manipulate her vocals into interesting new noises live. Watching her work the nobs was like watching alchemy or witchcraft. Other highlights included when she invited her full-size pet poodle on stage, and he politely sat like a good boy for a couple songs, while she sang to him. 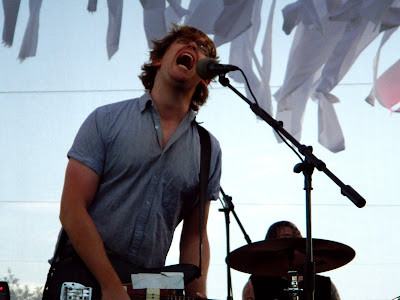 By the time Metz took to the Block Stage, the wires strung across the space in front of the stage were bedecked with sneakers that had been tied together. Clearly some bands and fans had gone hard before them. Metz may have taken that as a challenge, because as the sun set in peaceful dusky pinks and pale blue hues over the joshua trees, they slayed it. All three of the bandmates attacked each song like they had a personal vendetta against it. Their set had an infectious intensity unseen yet at the fest, and it immediately incited a huge pit. While the music blasted with pure power of thrashy drums and wailing guitars, in the breaks between songs they talked about being thrilled to be there and gave a long list of thankyous and shoutouts. They closed with an extended blowout of a finish that brought the crowd to a fever pitch. As the dust settled and the fest goers drifted off to other stages, you could see the tired satisfaction on everyone’s faces.